Victim of the attack (40) remains in a critical condition 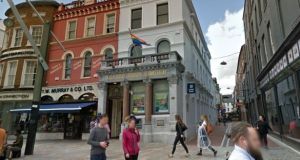 The assault happened near TW Murray and the Ulster Bank close to the junction of Patrick Street and Academy Street. Photograph: Google Street

Gardaí in Cork are to prepare a file for the DPP after releasing without charge a man arrested for questioning about an assault which left a 40-year-old man in a critical condition in hospital.

Detectives arrested the 46-year-old Briton in the Mardyke area of the city at around 8am on Friday for questioning about the assault of the man who is from the Knocknaheeney area.

It is the same area where a 53-year-old man from West Cork was found dead in the early hours of Sunday morning after suffering a serious and prolonged assault.

Officers brought the suspect for the Patrick Street attack to Gurranebraher Garda station where he was questioned until late on Friday night when he was released without charge and a file will now be prepared on the matter for the DPP.

The injured party in the case suffered serious injuries in the assault which happened at around 9.15pm on September 12th near TW Murray and the Ulster Bank close to the junction between Patrick St and Academy St.

The victim was rushed by ambulance to Cork University Hospital where he underwent surgery and he has remained in a critical condition in the hospital’s intensive care unit ever since.

The assault occurred when a number of volunteers working with the homeless in Cork were providing hot meals for people living rough on the streets and it is understood gardaí have interviewed members of the homeless community.

Gardaí later appealed to motorists who were driving on Patrick Street between 8.30pm and 9.30pm on September 12th and may have dash cam footage or mobile phone footage to contact them at Anglesea St on 021-4522000.