Budget 2020: Confusion over whether there were two funds clarified by department 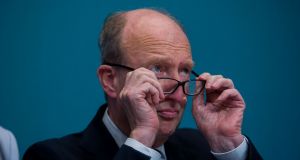 Confusion reigned over the Government’s budget measures for tourism, with the industry critical of the failure to reinstate its special VAT rate and its failure to allocate any extra funding for the sector unless there is a no-deal Brexit.

Early in his budget speech, Minister for Finance Paschal Donohoe, sought to reassure the slowing industry that he has heard its Brexit concerns.

He announced that €40 million would be made available in the event of a no-deal in regional funding for the Border, and to help Tourism Ireland and Fáilte Ireland support the sector, including with extra advertising cash for the UK.

The confusion arose, however, later in his speech when he again referred to an allocation of €40 million for tourism for 2020 without linking it to a no-deal Brexit, before adding that this would be supplemented with “further support for the industry should a no-deal happen”.

This led to some industry observers wondering if two separate €40 millions had been announced – one if there is no deal and one in any event. The Department of Finance later clarified, however, the Minister meant to refer to just one allocation of €40 million, which would only be offered if there is a no-deal.

Eoghan O’Mara-Walsh, the chief executive of industry umbrella group Irish Tourist Industry Confederation, welcomed the recognition that the sector would need extra support if there were a messy Brexit but said it “does not go far enough”.

“Fáilte Ireland has calculated for Government that a no-deal would cost the sector €390 million and 10,000 jobs,” he said. “Tourism is having a tougher year so we can see Brexit is having an impact already.”

He said the 9 per cent special VAT rate, which was abolished by the Minister a year ago, should have been slated for a comeback if there is a no-deal Brexit.

Adrian Cummins, chief executive of the Restaurants Association of Ireland, a member body of ITIC, said Minister for Tourism Shane Ross had “failed again” for not getting last year’s VAT move reversed.

“Some 27 other EU member states have a more competitive VAT rate than Ireland, which is having a negative impact on inbound tourism and will hit Ireland’s overall value-for-money offering and competitiveness,” he said.

“Additional monies given to Fáilte Ireland and Tourism Ireland – only in the event of a no-deal Brexit – do not directly and immediately have a positive effect on individual businesses in the industry.”