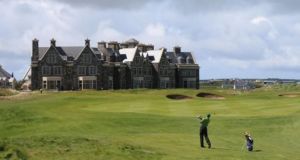 The application was granted to the Trump Organisation firm, TIGL Ireland Enterprises, for the development, which includes a new restaurant and gate house, that will double the size of the US president’s west Clare resort.

Trump International Golf Links and Hotel will remove the existing temporary marquee structure next to the resort’s golf course that is used for weddings and conferences.

Garreth Ruane, a senior executive planner at the council’s planning department, confirmed the project had been granted planning permission by the local authority.

Approval comes almost a year after the company submitted the planning application.

The council sought further information from the company last January on the impact of the development on the environment in the area and the adjoining protected conversation sites.

The council concluded there was “no likelihood of any significant effects on the environment arising from the proposed works”.

The Doonbeg resort opened in 2002 and was purchased by Mr Trump for €15 million two years before he became president. There are some 300 people employed at the business.

The council’s decision was welcomed by businesses in the west Clare area.

Hugh McNally, owner of Morrissey’s pub in Doonbeg, said the expansion of the resort and construction of permanent conference and wedding facilities would be a huge boost for the resort and local economy,

He pointed to the ESB’s decision to make 90 people redundant at the nearby coal-fired Moneypoint power station, the only other major employer in the area, as an example of the economic challenges facing the region.

“The development at Trump Doonbeg is so badly needed. It should be a no-brainer for rural west Clare. Rural Ireland is suffering, and we are suffering a good bit,” he said.

Another Doonbeg publican Tommy Tubridy said that planning permission was “fantastic news” for the area because it was going to mean “more jobs and keeping more people at home in west Clare.

“Not alone will this be a seasonable thing, we hope to have business all year around with the new conference and business facility and a new wedding venue,” he said.

Cillian Murphy, a Fianna Fáil councillor on the Loop Head peninsula near Doonbeg, said that the council’s decision was “very welcome news” for the area.

“Regardless of one’s perspective on the owner, it is a hugely important economic driver for the whole of West Clare and a massive declaration of confidence in the area as a whole,” he tweeted.