More die by suicide than are killed on State’s roads, summit hears 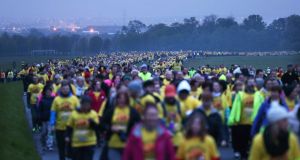 More people die by suicide in Ireland each year than are killed on the State’s roads, a mental health and well-being summit in Dublin has been told.

The summit, which heard a range of speakers discuss their own mental health histories, was held to mark Mental Health Week, which runs until Sunday.

Addressing a session entitled “Suicide prevention – how to have the conversation”, clinical psychologist Dr Mark Smyth said 352 people had died by suicide in Ireland in 2018 .

That figure was, he said, down from more than 500 in 2001 but still represented almost one person dying by suicide every day of the year.

Mr Smyth said there were a number of misconceptions around starting a conversation about suicide. It was not true that asking young people if they were contemplating suicide would put suicide into their head.

Mr Smyth is a senior clinical psychologist with the Child and Adolescent Mental Health Service, specialising in working with teenagers with mental health difficulties including anxiety, depression, self-harm and trauma. He said experience had shown “asking the question will not make a person take their life”.

But he said people with suicidal ideation frequently felt a burden on their families and were anxious about discussing it,wondering what they might do if parents, for example, got annoyed.

He said help was available from organisations such as Crisis Text Line Ireland; Childline, the Samaritans and the emergency departments of hospitals and the Garda.