‘Lifesaver’ deliveries in Creggan as all pull together 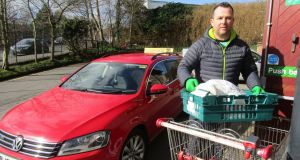 Carol Cunningham hears the beep of a car horn, then a rattle on the house window. When she looks outside she sees “the driver with gloves on, and a friendly smile. The groceries are on the front step.”

She is one of many who are now relying on a free home delivery service set up by Creggan Enterprises in Derry to keep the elderly, vulnerable and health workers supplied during the coronavirus outbreak.

Her husband has cancer, as does her elderly father; they have been advised to self-isolate at home.

“You could nearly sense the anxiety in the house this morning when we were starting to run out of the basics. I’m fit and healthy and so are my two children, and we don’t have to depend on much support. But suddenly you find yourself falling into that category of ‘vulnerable’.

“There’s often a lot of negative focus on Creggan for different reasons, but this is a real example of the community spirit in Creggan. Everyone pulls together. When the groceries arrived it was just a lifesaver. It was quite overwhelming, actually.”

The centre of operations is the Ráth Mór Centre in the heart of Creggan. A multi-purpose facility which comprises retail units, offices and community services, it was set up by Creggan Enterprises in the 1990s as a social economy venture to tackle social deprivation and unemployment by bringing jobs and investment to the area.

“That is the history of Creggan,” says the chief executive of Creggan Enterprises Conal McFeely. “There has always been a history of self-reliance and self-help here. People in times of crisis will rally round their neighbours, and that spirit is coming back out now.”

Usually Ráth Mór is busy. The hairdresser, the florist and the other community-run businesses which are normally bustling with customers are now closed. McFeely estimates that about 250 people in the centre have lost their jobs because of coronavirus.

With the North under “lockdown” only the supermarket, the chemist, the post office and the brand new doctor’s surgery – which opened on Monday – can remain open.

On the screens inside the centre a video made by healthcare workers in Belfast pleading with people to use social distancing is playing over and over again.

There had been concerns that the lockdown announced by the UK government on Monday night would prompt another wave of panic buying; so far footfall has been “steady”, with customers employing social distancing and buying only what they need.

“We thought there might have been panic buying once the lockdown was announced,” says McFeely, “ but there’s been none of that, and people are being very respectful.”

Some people, especially the elderly, are “fearful”; they have been “phoning up quite distressed, worried about being isolated.

“If people are more vulnerable at home that increases the need for the delivery service.”

Inside Kelly’s Eurospar, owner Adrian Kelly says the demand for the home delivery service has been increasing every day. “We see this as a vital service for the community going forward.”

He is advertising for extra staff, and is full of praise for the distributors who are keeping the shop stocked and for his own employees. Nobody, he says, has been abusing the home delivery service: “The public have been so good. They’re all saying, ‘we’re just so glad to get these’.

“People are acting responsibility and it’s nice to feel you’re doing something to help people.”

At some doors he might spend five or 10 minutes chatting – “three or four feet back from the door, obviously”, he says.

“Most of the doors you go to it’s old people, and they just want to chat. It doesn’t cost anything to be sociable with people, and you’re aware some of them can’t get out of the house. You’re probably the only person they might see all day.

“There was one woman I met yesterday, she had nobody to get the groceries for her. She would have had nothing only this was sorted out.”

At Creggan Neighbourhood Partnership (CNP) the community workers have seen that sense of relief first hand. They are providing a “targeted intervention” scheme to make sure those most in need have the essentials.

Ireland soccer international and local boy James McClean donated almost £3,000 of goods, and schools which have been forced to close have given them food from their canteens – “piles of peeled spuds and things” – which would otherwise have gone unused.

Once they shared a video from McClean on Facebook, community worker Shauna Deery explains, “social workers contacted us who were aware of vulnerable people, so we compiled packages of essentials and local volunteers delivered them to those most in need”.

“People were aware of what James [McClean] had done,” says Tony O’Doherty, “so you would drive into a street to deliver to maybe one lady or one gentleman, and the rest of the street would come out and say, ‘tell James that’s great’.

“Then they would come out and say, ‘by the way, do you know about wee Mrs so-and-so at number ten’, and we would go back and get another package.”

Both Creggan Enterprises and CNP have also put their own resources into the effort; their estimate is that they can keep going for around 12 weeks, but additional support must be put in place as quickly as possible.

“If this ramps up the way it looks like it will, it won’t last long,” says Kevin Hippsley of Creggan Enterprises. “We need funding. There should be an immediate crisis fund which should be flexible and react to the needs of the community as and when they need it, because those needs will change as this develops.

“The government must also provide clarity, because a lack of information creates fear, and we’re seeing that all the time. There must be clarity and direction.”

“This particular community has a history of self-help,” says McFeely, “and we are saying ‘we will do what it takes’.”