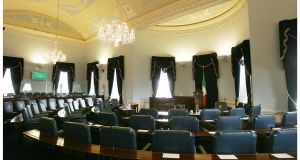 The Seanad will not be properly constituted from next week, political party leaders have been told.

Secretary General of the Government Martin Fraser, the most senior civil servant in the country, delivered his assessment on Monday following legal advice.

Mr Fraser told a meeting of Dáil party and group leaders that he was giving them the assessment as Secretary General and not just of the Department of the Taoiseach.

A number of those present at the meeting in Government Buildings, one of those regularly convened to discuss coronavirus crisis, interpreted Mr Fraser’s comments as challenging the leaders to form a government,

In the absence of a new government being in place, the Taoiseach’s 11 nominations to the upper house cannot be named - which means that the Government’s legislative actions will be strictly tied.

The 11 can only be nominated by an an incoming taoiseach and not an outgoing taoiseach, such as Leo Varadkar. These are in addition to newly elected Senators, with the Seanad election count taking place next week.

One source characterised Mr Fraser’s contribution as saying it was a matter for those present to deal with the lacuna that has arisen in the Seanad.

Another source present said it was almost as if Mr Fraser was urging the Dáil leaders to elect a taoiseach soon, and claimed it was almost a political point for a civil servant to have made.

It is understood Mr Fraser said his view was based on the advice of the Attorney General, Séamus Woulfe. Mr Varadkar agreed, as did Fianna Fáil leader Micheál Martin.

Mr Martin has said his party and Fine Gael will exchange policy papers on forming a government this week, with a videoconference between the two sides also mooted.

The meeting of party leaders broke up after two hours - more than two hours in the same room counts as being in close contact in coronavirus terms - but a discussion took place afterwards about the appointment of a temporary Leas Ceann Comhairle of the Dáil, who is usually elected by a secret ballot of TDs.

There was no decision on the issue.