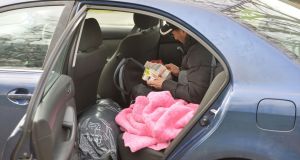 Abden Yayaoui would rather sleep in his car than go into a hostel for fear of catching coronavirus. Photograph: Alan Betson

Abden Yayaoui (53) is diabetic, underweight and homeless. Being “really worried” about coronavirus and with nowhere to self-isolate, he sleeps in his car.

He is one of several men concerned about lack of single rooms at their hostel, the Phoenix Lodge on Dublin’s Parkgate Street. While fewer than 20 single men are accommodated here by the Dublin Region Homeless Executive (DRHE), none have their own room.

Mr Yayaoui, an unemployed bus driver, says he has asked the DRHE about getting a single room elsewhere. “They had no solution for me, that’s the bottom line. I am really worried. Everybody is worried. If I get the virus my immune system can’t fight it. So I said: ‘Give my bed to someone else. I will stay in my car.’ I am lucky I have a car.”

His bed has not been taken from him, however, and he sleeps in it some nights, arriving back late when others have gone to bed to minimise interaction. He shows his car, a duvet in the back seat and four holdalls in the boot, saying: “This is everything I own.”

Cameron Neilson (48), has been homeless for a month following a relationship breakdown. The banqueting manager in a major Dublin hotel, he is on a Ventolin inhaler.

“I called Parkgate Hall [DRHE]and was told effectively if I am that concerned I should stay in my car. I am worried. I worked, I went to university and because I found myself in this situation my health is at risk.”

The DRHE said however that “no homeless client would ever be advised to sleep in a car”.

Mr Neilson thought he would be in the hostel “a few weeks at most”. He had three apartment viewings lined up this week. “But they’ve all been cancelled because of the coronavirus. I’m stuck.”

Ray Halpin (58), an adult education co-ordinator, lost the room he had been renting in a house for 19 years earlier this year. “My relationship with homeless services has been fine. They are doing their job well. Our complaints began with this crisis.”

Up until Monday, the men had to leave the hostel during the day. “That was inexcusable in this situation,” says Mr Halpin. They can now stay indoors, although they are worried about overcrowding.

“It seems to me disgraceful that in a city full of empty hotels, homeless men and women are being subjected to these sorts of conditions. It needs to be resolved because as this horrific disease takes hold, it’s in places like ours that it will all unravel.”

A number of TDs, including Richard Boyd Barrett (People Before Profit), have called for empty properties to be requisitioned during the pandemic to alleviate overcrowding in hostels and direct provision centres.

“The cramped and overcrowded conditions many of these people face are increased due to the Covid-19 pandemic.

“I am calling on the Minister [for Housing Eoghan Murphy] to take control of hotels that are empty and apartments and houses that are vacant and are being hoarded by private developers, speculators, vultures and cuckoo funds, to house these vulnerable people in a way that is safe and reduces the risk of infection and transmission of the virus.”

The Peter McVerry Trust says about 60 per cent of its 600 beds in Dublin and Kildare are in single or double rooms. The charity is “in discussions with hotel owners in the city centre [and] hopes to secure an additional 100 single-person rooms as quickly as possible”.

“In partnership with the DRHE and the HSE we have also agreed to take on the management of 110 short-stay apartments in the city centre as part of the Covid-19 response,” said a spokesman.

Depaul, which provides 416 beds in Dublin, is working with the HSE and DRHE “to identify and establish additional self-isolation units” .

The Phoenix Lodge confirmed it had no single rooms for adult men.

The DRHE said on Tuesday evening it is working closely with the four Dublin local authorities and the HSE in coordinating the response to Covid-19 related public health concerns among users of emergency accommodation and rough sleepers.

“We are acutely aware that those in emergency accommodation are worried and we will, along with all service providers, continue to work with the HSE to ensure that the arrangements in place for those experiencing homelessness are adequate and consistent with the medical and health and safety advice that is being provided on a daily basis,” it said.

It added that it had secured additional emergency accommodation to ensure there is sufficient capacity to allow for isolation of suspected or confirmed cases of Covid-19.

“In consultation with the HSE, we have identified a number of high risk individuals currently residing in emergency accommodation and are currently in the process of moving these people to a separate cocooning facility,” it added.