The new unemployed: ‘We’re hoping it will be short term’ 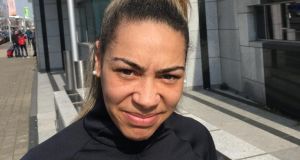 Shawna Furman: “You have to take every day as it comes.” Photograph: Colm Keena

He was laid off from his job in security and was told there might be work again in a few weeks. “They are saying, could be, could be. We don’t know what is going on.”

A tall, strong-looking man, he is speaking to The Irish Times outside the Intreo centre on King’s Inns Street, Dublin, where people are dropping in forms to apply for social welfare. All the time he keeps his woollen scarf held over his mouth and nose.

A friend, also from Somalia, is in hospital, being treated for the effects of the coronavirus. “It is a crazy time.”

He has been living in Ireland for the past year, and these days tries to stay in the house with his wife and children as much as is possible.

Glauco Queiroz is from Brazil, and has been living in Ireland for 2½ years. On Sunday he was told by his employer, who runs a Subway outlet, that there were no hours for him to work. “It used to be 30, 35 hours a week. Now we don’t know. For now.”

He feels it is safer for him to stay in Ireland rather than see out the coronavirus crisis back in Brazil.

People turning up at the office on King’s Inns Street are not being allowed in. They are being asked to drop their application forms for social welfare into a postbox.

A man sitting behind a table just inside the door takes queries from a safe distance.

A woman is telling those who have come to collect application forms, rather than printing them from the website, that they have to fill them in at home and bring them back. “You’re not allowed fill them in on the street,” she tells people.

Yet some people can be seen filling in the forms across the road or down the street out of her sight.

Carlos Vinicius and Marina Gabriel, both from Brazil, worked respectively in a cafe and in a hotel, but have both lost their income.

“The job just sent us home,” says Carlos. “They had to close, and now we have to stay at home.”

There are five of them, all from Brazil, sharing an apartment in Smithfield, Dublin, and all are now unemployed or without an income.

“I thought about going home but things over there are getting worse as well,” says Carlos. “I’m a bit nervous. I was thinking about going home even before this started, I’ve been here for so long [3½ years]. I’ll go back anyway as soon as this thing finishes.”

Sarita Rizzo, from Brazil, was working as a self employed cleaner but has had no work since last week. “My life is here. It’s better here than in Brazil.”

She lives with her husband, who is still working. They are doing their best to stay away from others as much as possible.

A taxi driver who doesn’t want to give his name is dropping in a form for his daughter (23), a beauty technician who has been let go. He shares his house with her and his son (17). “You try to make it as calm as you can.” The mortgage is paid for the next month. “We’ll see after that.”

People don’t want to get into taxis, he says, and taxi drivers don’t want to be working. He has a friend who earned €19 over six hours on Sunday. “I don’t want to work myself at the minute.”

Yet taxi drivers still have to pay their insurance, which can be up to €500 a month. As matters stand if he cancels his taxi insurance he won’t be able to use his car as a private vehicle, something he is hoping the insurance companies can sort out shortly.

Outside the Intreo office in Ballymun, where the closure of Ikea and other retail outlets has hit the local community, people are observing social distancing while waiting their turn to go into the building.

A man who speaks to The Irish Times but doesn’t want his name published says he appreciates the policy that has been adopted by his employer which supplies ground staff to an airline at the airport.

“Ninety per cent of the flights are grounded, so basically we all got a 50 per cent pay cut. They could have sent us all home, so that’s brilliant.”

There will be a further drop in income shortly when the number of days he is being asked to work will drop by half. He will have to budget as the money he gets from his employer and from social welfare won’t pay all the bills.

He doesn’t mind going to work. “People still have to get home. I wouldn’t like to see people stuck, to see families being stuck.”

Shawna Furman works in hospitality in Croke Park, but was told two weeks ago there would be no work for a while. She lives at home with her family and her seven-year-old daughter, who is putting in the hours practising her Irish dancing and watching online classes.

“You just don’t know what way to see it. You have to take every day as it comes.”

Dee Griffin is seeing the upside in the crisis, enjoying spending time at home with her 22-year-old daughter and 16-year-old son.

“I’m loving it. I’ve got a full house and I love it. I stay in contact with people over the phone, and I’m spending a lot of time in the garden. At least it’s not raining.”

She was dropping in a form to avail of the new service by which her jobseeker’s allowance and rent allowance will now be paid directly into her bank account rather than being collected from the local post office. “It’s all part of the social distancing.”

Edward Kearney’s wife has been unwell since last Friday, and he has been told to stay away from work until his wife, who is in self-isolation, has received the coronavirus test.

“So we’re hoping it will be short term. She thinks it’s just a cold or a flu, but just to be extra careful.”

They have three children, who have also been self-isolating. “They’ve been quite good. The school has sent them homework online, and they are doing a few hours work around the house every day.”

Debbie, a carer who doesn’t want to give her full name, is dropping in a form for her husband, who is also a carer. He was given a blood test recently as part of a regular health check-up, and because his immune system was “a bit low” his GP contacted him and told him to self-isolate.

Meanwhile she is still working, visiting a number of elderly people every day.

“It’s impossible to do social distancing when you are minding elderly people like that. So we try to get in and out as quickly as possible because we don’t know who else is coming and going from the houses.”

When she comes home she goes upstairs without touching her three, pre-teen children, washes and changes her clothes, and then comes down to greet them.

“It’s a bit difficult. We don’t want them to get sick. We want to be able to stay away from hospitals.”