Covid-19: Los Paddys relieved to make it back from south America 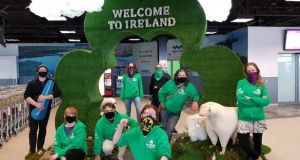 Los Paddys: masked and home after a circuitous route from south America.

Seven members and supporters of eclectic group Los Paddys, which had gone to south America for St Patrick’s Day, arrived back in Co Clare on Monday after a marathon journey through “half closed” airports in Chile, Canada and Britain.

Los Paddys describe their music as “north Clare meets South America for a dance” a “fusion of Celtic roots with South American rhythm”.

The group that arrived in Chile numbered 14, including musicians, two partners of musicians and two children. Six members of Los Paddys are resident in Co Clare, others are Argentinian, French and Spanish.

Because of the nature of their music Culture Ireland supported be group’s trip to Santiago, Chile, where there was a hectic round of gigs planned around the St Patrick’s Day Festival.

But the group was two weeks into the tour when coronavirus put paid to the St Patrick’s Day celebrations worldwide. Holed up in two apartments in Santiago, they could only watch as gigs were cancelled and Irish people they talked to were scrambling to get flights back to Ireland.

“About seven or eight days ago nobody knew a thing about the virus but suddenly everyone knew about it” said songwriter Paddy Mulcahy. “A band member, Fernando, had originally fled Chile under Gen Pinochet for France and become a French citizen. So as we made plans to get out, we thought it best to bring Fernando back to Co Clare” he said.

As options for trips home via the United States and Europe reduced due to restrictions imposed by national governments, while the price of airline tickets rose, the band launched a Go Fund page, asking fans to raise cash to get them home safely.

“Three of us went to Argentina, three went to Spain and one had left earlier for Dublin. So the seven remaining raised about €7,000 which was just about enough or nearly enough to cover the tickets home.

“It was surreal. The flight from Santiago to Toronto was full and when we got to

Toronto people were taking the social distancing rules very seriously. On the next leg, the flight to London, there were very few people on the plane and the six crew members were down the back with their faces well covered in what looked like tinfoil hats.”

Mulcahy said conditions in Heathrow Airport were very strange. “The place was closed, it was dead. But the few people who were around did not seem to be bothered about keeping their distance at all.”

They got a connecting flight to Shannon Airport and emerged smiling behind face masks, ready for 12 days of isolation . . . but very glad to be home” added Mulcahy.

The band is booked in Co Clare for Inis Fest among other festivals this summer.