Coronavirus Q&A: Why is legislation being rushed through the Oireachtas? 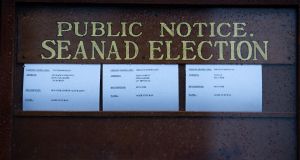 A view of nominations for Seanad Éireann. Photograph: Tom Honan

Emergency legislation to impose a three-month rent freeze and a ban on evictions will be dealt with this week by the Dáil, when it sits on Thursday and by the Seanad on Friday.

Q: Why the rush with legislation?

A: There are two reasons for this. The first is the Covid-19 pandemic has caused a national emergency, a public health threat of unimaginable proportions, and an imminent collapse of economic activity. The State needs to move very quickly to respond to this.

The second reason is technical. The Seanad general election is taking place over next weekend. The most serious upshot of it, from a Covid-19 point of view, is that no new legislation will be possible from next week until such time a new government is formed.

Q: But weren’t the elections held on February 8th?

A: They were indeed, but they were for the Dáil. In Ireland our parliamentary elections are staggered. The Constitution provides that the Seanad elections must take place “not later than 90 days after the dissolution of the Dáil”. So that is why its elections are taking place now almost two months after the Dáil elections. Indeed, the outgoing Seanad is still in place until the elections.

Q: So what’s the problem? Won’t the new Seanad be able to pass Bills?

A: No. It won’t. There’s a fly in the ointment. And it is this. The are 60 seats in all but they are selected by different methods. The majority, 43, belong to one of five vocational panels. The electorate is a little over 1,100: the State’s 949 councillors; and the 160 TDs. A further six are elected by graduate of the National University of Ireland and of Trinity College Dublin. And here’s the rub. The remaining 11 are nominated by the Taoiseach.

Article 18 of the Constitution provides that it is the “Taoiseach appointed next after after the reassembly of Dáil Éireann”. In other, words it is the new taoiseach elected by the Dáil after a general election who has the power to name the eleven nominees.

So Leo Varadkar does not fit that bill. He is the outgoing taoiseach, executing the role in a caretaker capacity. The Dáil will essentially have to elect a new taoiseach before the Seanad is fully constituted.

Q: So what’s the status of the new Seanad before a new taoiseach is elected?

A: Well, the situation is anomalous. The majority view of legal academics is the Seanad is essentially in a limbo situation until government-formation is resolved. It happened in 2016 when it took 73 days to form a government. However, those discussions four years ago did not happen in the teeth of the most extraordinary crisis facing the State since its foundation.

The view is that a Seanad with 49 members is not properly constituted and can’t have proper Constitutional standing until the Taoiseach names the 11 nominees.

The authors envisaged such a situation arising and described it as such: “Though this point will not be clear until it has been considered by the courts, it would seem to be a constitutional lacuna that could in certain circumstances be high problematic.”

Q: Is there any way around it without forming a Government?

A: The short answer is No. That said, there have been some views that suggest there could be a workaround that might not offend the Constitution.

The outgoing Labour senator Ivana Bacik is also a law professor at TCD. She believes it is possible for the Seanad to meet and to change its standing orders to allow it operate without the new 11 Taoiseach’s nominees.

Standing orders are the internal rules of procedure that Senators themselves can vote to change.

Ms Bacik said the legal advice received by the Labour Party suggested the Constitution doesn’t preclude the Seanad from meeting without the newly appointed nominees.

“What we would need to do is to change Seanad standing orders to enable the new Seanad to sit and pass legislation without Taoiseach’s nominees.”

“That is where there’s an emergency like what we’re in now and they can bypass the Seanad but the legislation only has about 90 days where it’s in effect,” she said.

She also added there was a lack of clarity.

However, the view of Attorney General Séamus Woulfe is said to accord with that of Hogan and Whyte. In other words, without the 11 Taoiseach’s nominees, the Seanad is not in a position to operate.

The secretary general of Government and the State’s highest ranking civil servant, Martin Fraser, told Opposition leaders as much during meetings in Government Buildings on Monday.

The subliminal message (and maybe not subliminal at all) is that urgency needs to be injected into the government-formation talks.

Q: So where does that leave us?

A: With three days to rush through any piece of emergency legislation that’s needed to cope with the threat of Covid-19. That’s why the Dáil will be sitting on Thursday and the Seanad, on Friday, to debate an Omnibus Bill which will - among other things - give protection to tenants who face eviction by landlords and provide for emergency payments and welfare. It all has to be passed by Friday, the last day in existence of the current Seanad.