Less than a third of promised 4,000 refugees settled here 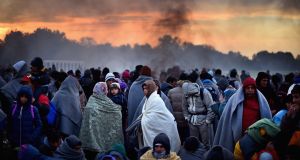 The Irish Refugee and Migration Coalition, an umbrella body for asylum and migration organisations, has called on the Government to reunite refugee families. Photograph: Jeff J Mitchell/Getty Images

Less than a third of the 4,000 refugees the Government promised to accept by the end of the 2017 have been resettled here, according to the most recent figures released ahead of World Refugee Day on Tuesday.

Elsewhere, charities have called for a reversal of parts of the International Protection Act 2015, which narrowed the definition of family and removed the possibility for refugees to apply for extended family members to joint them in Ireland.

President Michael D Higgins has also highlighted the plight of refugees and the importance of international co-operation to support them.

“This year, as the world continues to struggle to find effective solutions to the horrors and fears created by wars, crises and violent attacks, as well as to the unprecedented levels of displacement they provoke, we should use World Refugee Day to strengthen our resolve to unite, and face these challenges together,” he said.

A total of 1,238 refugees have moved to Ireland since the Irish Refugee Protection Programme was announced in September 2015.

Almost 780 refugees moved from Lebanon and nearly 460 came from camps in Greece. A further 260 refugees will be brought to Ireland from the Lebanon by the end of the year, the Department of Justice has said, as will 320 people in Greece, who have been assessed and cleared for travel.

Even when those numbers arrive, Ireland will still not have reached half its target.

Though we had promised to relocate refugees from Italy, none have yet been moved here. The Department of Justice said this was because Italian authorities have not allowed law enforcement agencies from other EU member states to conduct security assessments of candidates on its soil.

In 2016, more than 5,000 people trying to reach Europe died crossing the Mediterranean. So far this year, more than 1,800 people have lost their lives on the crossing.

The UN’s refugee agency, UNHCR, has said 65.6 million people have now been forcibly displaced from their homes, an increase of 300,000 on last year.

The Irish Refugee and Migration Coalition, an umbrella body for asylum and migration organisations, has called on the Government to reunite refugee families.

Nick Henderson, chief executive of the Irish Refugee Council, an affiliate of the coalition, said because of the change in family reunification rules, “hundreds of families will continue to be separated”, and “loved ones will remain in volatile and hostile areas as they have no other way out”.

Oxfam Ireland, also an affiliate of the coalition, called on the newly appointed Minister for Justice, Charlie Flanagan, to urgently reverse the 2015 restrictions on family reunification.

The charity launched a report, Dear Family: How European Migration Policies are Keeping Families Apart. It details testimonies of refugees and migrants seeking to be reunited with their loved ones and shows how bureaucratic challenges and a narrow definition of “family” in EU member states, keep families apart.

Jim Clarken, chief executive of the charity , said a more flexible approach to family reunification could help deliver on Ireland’s target of 4,000 refugees.

Nasc, the Irish Immigrant Support Centre in Cork, is hosting a series of events all week to raise awareness of the plight of displaced people. The main event, on Tuesday at 11am, will promote the charity’s Safe Passage Campaign, calling for humanitarian admission to help reunite families fleeing conflict.

In a statement to the Seanad last week, Minister for Children Katherine Zappone, on behalf of the Minister for Justice, said if the relocation mechanism does not permit Ireland to take in sufficient numbers of asylum seekers under relocation, the Government commitment to take in 4,000 people would remain.

“Ireland will take in these numbers through other mechanisms should this prove necessary,” she said.