Two cases of diphtheria in Ireland after almost 50 years

Both patients survived, but disease can kill one in 20 people who contract it 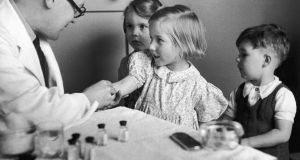 Almost 50 years after it was last reported, diphtheria has made a comeback in Ireland with two recent cases.

One case of the potentially fatal disease was reported last year and one this year, the HSE confirmed. Both patients were adults aged between 45 and 55 years and survived after treatment with antibiotics; one was male and one female.

The HSE’s Health Protection Surveillance Centre declined to say where the cases occurred for reasons of patient confidentiality. One of the adults was not vaccinated while the vaccination status of the other was not known.

Diphtheria is a serious disease that kills one in 20 people who get it. As recently as 1948, it was responsible for more than 500 deaths in Ireland. Caused by bacteria that are found in the mouth, throat and nose, it is easily spread to others by coughing or sneezing.

The source of the infection was not identified for either case, but one of the patients reported recent travel from the Philippines. This was considered the likely place of infection, though no known contact with a person with diphtheria was reported.

Members of the patient’s household were screen and found to be negative for the bug.

More worryingly, the other case had no history of travel outside Ireland during the incubation period, and no human or animal contact was identified as the likely source of infection.

In both cases, all close contacts of the patients were identified and interviewed as part of a public health investigation. Contacts were also tested to see if they were carrying the organism but none was found to be infected.

Vaccination is the only way to prevent diphtheria infection. Children normally receive it in their first, with boosters given at 4-5 years and 11-14 years. The national uptake of the vaccine is over 90 per cent.