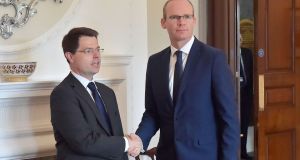 The new Minister for Foreign Affairs Simon Coveney has warned that Northern Ireland could be the part of Europe “most vulnerable” to a poor deal between London and Brussels on the UK quitting the European Union.

Mr Coveney made his comments at Stormont on Monday evening after a day of British and Irish governmental and multi-party talks aimed at finding an agreement to reinstate the Northern Executive and Assembly by the deadline of June 29th.

Mr Coveney, who is meeting the EU’s chief Brexit negotiator Michel Barnier in Luxembourg on Tuesday, said it was vital that the Executive be restored not only for politics in Northern Ireland but to ensure the North has a voice at the Brexit negotiations.

“Northern Ireland is perhaps the most vulnerable part of Europe to a bad Brexit deal, should that happen,” said Mr Coveney. “Even if there weren’t a deadline of the 29th I think there is a sense of urgency here that Northern Ireland needs its own voice again in the context of Brexit,” he added. “Without that voice people in Northern Ireland will be disadvantaged in a major way and will be essentially relying on others to make the case for them. I will be making that case tomorrow for example despite the fact that it should really be a First Minister and a Deputy First Minister there to meet Michel Barnier or others to make the case for Northern Ireland.”

This was Mr Coveney’s first visit to Stormont as Minister for Foreign Affairs. He first met northern secretary James Brokenshire around noon and later they engaged in round-table talks with the North’s five main parties.

They also took part in a series of separate bilateral meetings. On the talks to strike a deal between the DUP and British conservatives to safeguard a new Tory government Mr Coveney said the Government was concerned “that if that deal wasn’t an appropriate deal it could undermine the Good Friday agreement”.

“I have been assured by Arlene Foster that that is not going to be the case and they are fighting for a deal that is good for Northern Ireland and good for everybody,” he said.

The Minister added that it was important to publish any DUP-Conservatives “straight away so that it is demystified and people don’t see conspiracies that aren’t there”. Mr Coveney is due to return to the talks on Wednesday.

He said Monday’s discussions were “constructive” and that he detected a “can-do” attitude among the parties to restore devolution.

DUP senior negotiator Simon Hamilton hoped that the DUP-Tory talks would conclude soon. “They will take as long as they take. We are working away at them and we will continue to work away at them. We are hopeful of getting a resolution to them as quickly as possible,” he said.

He repeated that the DUP wanted a “sensible” Brexit.

He also acknowledged how Taoiseach Leo Varadkar expressed his strong support for same sex marriage in London where he met Ms May on Monday.

“Leo has a well-stated and clear position on it. The DUP equally has a clear and well stated position in respect of that issue,” he said.

Sinn Féin’s Northern Ireland leader Michelle O’Neill said that on Brexit the Sinn Féin call for special designated status for Northern Ireland within the EU was “building up traction” across Europe.

“Clearly the DUP are on the wrong side of the argument in cosying up alongside the Tory government who are disrespecting the mandate of the people here. We put forward our case for special status. It is an alternative to Brexit. We do believe we are getting traction and we are going to continue in that vein,” she said.

Ms O’Neill would not be drawn on the prospects of a deal being achieved by the June 29th deadline.

She repeated that Sinn Féin wanted to reach agreement but one that was based on equality, respect and integrity.