Teachers happy with range of questions and quality of graphics 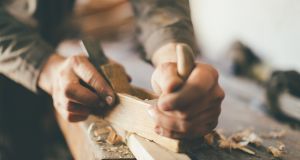 The Junior Cert materials technology (wood) exam was worth just a third of marks, with the remainder resting on practical work completed by students earlier in the year. Photo: iStock

The Junior Cert woodwork exam papers were fair and well-structured to reward students with a wide knowledge of the syllabus, according to teachers.

The exam, formally known as materials technology (wood) exams , was worth just a third of marks, with the remainder resting on practical work completed earlier in the year.

Teachers were generally happy with the range of questions and the quality of graphics used in the paper.

Candidates were asked to sketch a range of items such as a desk tidy, a wall-mounted unit to display tea-lights and candles, and the process involved in carving a duck from blocks of wood.

Michael Leyden, a teacher at Abbey Vocational School, Donegal Town, said section A of the the higher level paper should not have presented too much trouble for the well-prepared candidate.

“Question 12 in this section provided a different approach in eliciting candidates’ knowledge of timber conversion methods,” he said. “They were asked to sketch out a different method to the one shown in the question.”

Mr Leyden, a subject representative for the TUI, said section B was pitched at an appropriate level, and well-prepared candidates would have done well.

However, the final part of question three – which required candidates to sketch how to join manufactured boards at 90-degree angles – sought a very precise answer, and would have tested many higher level candidates.

He added that the quality of graphics used in the questions was very good, and would have greatly assisted candidates.

He had one reservation about the quality of pictures used in a question where students were asked to identify different types of manufactured boards from black and white photographs.

“This could have posed some challenges. If these were colour photos it might have made it easier for candidate to make out,” said Mr Curley, a subject representative for the ASTI.

One question on lamination could have posed difficulties for some students, while another on the use of various tools would have been warmly welcomed by most candidates.

“The papers catered to a different range of abilities. It’s a difficult balancing act to really test higher level students without alienating other candidates.”

At ordinary level, Mr Leyden described the paper as fair and one which covered a wide range of topics suitable for the ordinary level candidate. “The layout of the paper followed previous years, and there were no surprises for candidates.”

Mr Curley said the use of large and engaging pictures was a good way of capturing students’ interest.