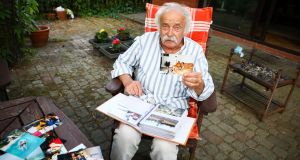 .Andrzej Waskiewicz holds a photograph of his son, Michal, at his home in Wloclawek, Poland. Photograph: Beata Zawrzel for The Irish Times.

The father of a man who died near Christ Church Cathedral in Dublin last November has expressed frustration and shock after discovering his son’s body was buried in Dublin while he was preparing for his funeral in Poland.

Mr Wasikiewicz, who lives in Wloclawek, said he was shocked to receive a call late last year from the Polish embassy in Dublin informing him that Michal, who was in his mid 40s, had been found dead on a street.

He law saw Michal in 2016 when he left Poland to join a friend in Dublin but never heard from him after that. Friends in Dublin said Michal ended up on the streets not long after arriving in Ireland. They say was addicted to alcohol but never took drugs.

Mr Wasikiewicz told The Irish Times that he was sent his son’s death certificate but does not yet know exactly how he died. Friends believe he suffered a heart attack but the results of the inquest into his death are not expected to be available until next year.

“Family and friends keep asking me when his funeral will be held. I’ve got the money saved for the funeral and the transport of his body. We’ve got a family grave in the local cemetery,” he said.

Mr Wasikiewicz’s family was contacted in July by the Dublin District Coroner who said Michal’s body had already been buried in Dublin. When Mr Wasikiewicz explained he had planned to cremate his son, the coroner’s office offered to exhume and cremate the body and send the urn to Poland, he says.

He rejected this offer and is now planning “a symbolic funeral” for his son.

A spokesman for Dublin District Coroner’s Court said: “The remains of any unclaimed or unidentified person who is the subject of a coroner’s enquiry are held at the discretion of the Coroner at the Dublin District Mortuary.

“If the deceased remains are unclaimed despite enquiries made by An Garda Síochána the Coroner ultimately directs respectful burial in a designated grave at Glasnevin Cemetery.”