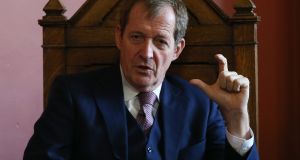 Former Downing Street press secretary Alastair Campbell said he cannot see London securing approval for a Brexit deal by October 31st, pushing the UK into an extension and “anything can happen territory”.

Mr Campbell, speaking on a visit to Dublin, said the proposal to keep Northern Ireland in the UK customs territory but operating under EU customs rules would, if agreed, mean UK prime minister Boris Johnson and the pro-Brexit Democratic Unionist Party reneging on red lines they once said could not be crossed.

“Johnson has finally realised that no deal really is to be avoided at all costs. He appears to be caving all over the place,” said the former journalist, now an ardent Remain campaigner for a second referendum on Brexit.

The former Labour Party spin doctor said the DUP had “a long history of accusing other people of selling out and it is almost like they are selling out themselves” if they agreed to the “double customs” proposal.

He said he could not see how the DUP would support the latest Brexit proposal but he added there was talk they were “getting another big bung,” referring to a mooted investment package for Northern Ireland.

“Their line, the whole way through, has been that Northern Ireland must not be treated different to any other part of the UK and that’s exactly what is happening,” he told The Irish Times before delivering a lecture at Trinity College Dublin’s University Philosophical Society on the importance of fighting populism .

He described the proposal as creating a “bizarre situation” of leaving Northern Ireland in the EU’s trading system and Britain leaving in a “hard Brexit”.

An adviser on the People’s Vote campaign for another referendum, Mr Campbell questioned how Mr Johnson could put the proposed deal to the UK parliament given that most Conservative MPs, including the hardline Brexiteer European Research Group, and the DUP had previously deemed the measures unacceptable.

“The technical people will be very, very worried that something so fiendishly complicated which it will be, should be agreed and rushed through 27 [EU] governments in a matter of days. So I still think it’s unlikely that there won’t be an extension,” he said.

He anticipated that there would be some British MPs who would only support the deal, coming after more than three years since the Brexit vote, on the basis that it is the subject of a confirmatory referendum.

He would be “very shocked,” he said, if Labour MPs supported what would amount to “a hard-right economic, hard Brexit”.

Mr Campbell said the UK’s exit had come down to a choice between a hard border on the island of Ireland or a hard border between Britain and Northern Ireland, and that Mr Johnson had chosen the latter.

Concerns about a hard border on the island of Ireland and how it could lead to republican violence would now be replaced by security concerns on how loyalists would react to a border in the Irish Sea, he said.

“We always talk about a return to republican violence but the union is a big part of this debate so I don’t want to overstate it but I think it’s obvious what we’re talking about,” he said.

In a question-and-answer session after his speech, Mr Campbell said he did not underestimate “how this one is going to upset an awful lot of people up the road”, describing the situation with loyalists as “very tricky and very delicate”.

He said that the proposal is now so different to the Brexit promised three years ago by the Leave camp in the referendum campaign that it would be “undemocratic not to have another referendum”.