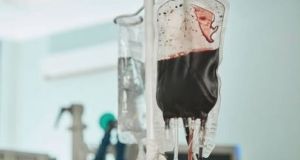 About 1% of the population requires a blood transfusion each year, while one-in-four people will at some stage benefit from a donation. Photograph: Getty Images

Joint procurement arrangements between the Irish and UK blood donation services will end with Brexit, although critical equipment supplies have been stockpiled, the Irish Blood Transfusion Service (IBTS) has said.

Its 2018 annual report, published on Monday, says extreme weather events were the main reason for a slight drop in the level of donations.

Ireland currently sources equipment such as blood bags and testing kits alongside the UK, an arrangement whose end will have some unspecified cost implications for the service. The current supply agreement is to run for another two years.

It said there would also be changes to how goods were transported to Ireland, although critical supplies were identified by the IBTS during 2018 and contingencies placed on site.

In his foreword to the report, chief executive Andrew Kelly said the UK’s pending departure had been a backdrop to discussions between the blood services here and in the UK over the past nine months.

“As we entered 2019 and the possibility of a no-deal exit from the EU the IBTS had to engage more with our suppliers and look to having a contingency stock of our critical supplies on site.

“We were also engaged with the UK blood services in planning for a no deal but also what issues we would have to be mindful of post-Brexit. This issue looks set to continue well into 2019.”

Blood testing and other professional partnerships between Ireland and the UK will not be affected by the Brexit outcome.

Monday also marked the end of a ban on blood donations from people who lived in the UK for a year or more between 1980 and 1996.

Introduced in November 2004 following the outbreak of “mad cow” disease BSE (bovine spongiform encephalopathy), there were concerns about the risk of acquiring variant Creutzfeldt-Jakob disease (vCJD) by eating meat from infected cattle.

Last year the IBTS collected 129,589 donations, down by 977 on 2017, a reduction of about 0.7 per cent, mainly due to severe weather events that led to the closure of 14 clinics during Storm Emma.

“The Blood Transfusion Service, like all public bodies, was challenged early on in 2018 with dealing with the effects of Storm Emma and the Beast from the East,” Mr Kelly said.

“The organisation managed very well, and it tested our contingency arrangements and how risk was managed. The staff response was excellent and ensured that hospitals and patients received blood and blood products when required.”

About 1 per cent of the population requires a blood transfusion each year, while one-in-four people will at some stage benefit from a donation.

In response to data in the report, Minister for Health Simon Harris noted an increase in the number of those donating although in relatively small numbers in the 18-24 age category.

Despite a slight increase last year, 2016 had the highest number of first-time donors over the last five years. Men out-donated women in 2018.