Turnover up at Doyle’s four UK hotels despite Brexit uncertainty

Latest accounts for Doyle hotels show chain made a pretax profit of €11.6m in 2018 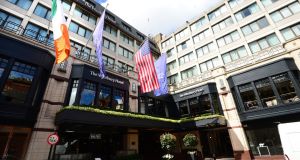 Turnover at the Doyle hotel group’s four UK properties rose 11 per cent last year to €69 million in spite of uncertainty around Brexit and a currency impact from a decline in the value of sterling.

It is understood that the turnover mix in the UK went from 60 per cent corporate and 40 per cent leisure to being a 50-50 split between the two, while its average room rates increased.

Some 47 per cent of Doyle’s overall turnover is denominated in sterling. It operates four hotels in Britain – three in London (the Kensington, Marylebone and Bloomsbury) and one in Bristol. The Marylebone and Kensington properties both received upgrades during the year.

Latest accounts for Doyle Hotels (Holdings) Ltd show that the group made a pretax profit of €11.6 million on turnover of €146.5 million in 2018.

It recorded an Ebitda (earnings before interest, tax, depreciation and amortisation) of €31.5 million, up from €30.4 million in the previous year.

The directors report cited the key risks facing the group as including “Brexit, a deterioration in the global economy, changes in inflation, an increase in interest rates and fluctuations in exchange rates”.

The Irish hotel chain is believed to have put in place contingency plans with suppliers to deal with the potential fallout from a no-deal Brexit.

Revenue from its three Irish hotels – the Westbury and Croke Park properties in Dublin and the River Lee in Cork – last year rose to €57.8 million from €54 million in 2017.

While there has been an evident decline in the number of UK visitors to Ireland in recent months, it is understood that the five-star Westbury in Dublin is experiencing good trading.

In the US, revenue at its five-star Dupont hotel in Washington DC declined 22 per cent to €19.8 million. This reflected the impact of a weaker dollar and a major programme of refurbishment at the hotel, which included a new 4,000sq ft penthouse suite, with a garden terrace overlooking Dupont Circle and the Washington Monument. This suite costs guests $15,000 a night.

About 14 per cent of the Doyle’s turnover is denominated in dollars.

Total compensation paid to key management personnel, including the directors, rose almost 5 per cent to just under €2.9 million.

The accounts also show that Doyle Hotels’ property portfolio was valued at €570 million, up from €554 million a year earlier. Shareholders’ funds rose to €334 million from €323 million previously.

The Doyle Collection comprises eight hotels and is owned by members of the Doyle and Beatty families. It traces its roots back to a company founded by well-known Irish hotelier PV Doyle.