Cian Alcock spent €1,000 on ticket to quarter-final, but now his seat is for the wrong game 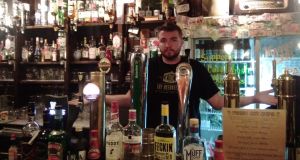 Cork man Cian Alcock at An Solas bar in Tokyo. Along with thousands of others, he hopes to secure a ticket for Ireland’s clash with the All Blacks on Saturday. Photograph: courtesy Cian Alcock.

Unfortunately, when he handed over €1,000 for a premium ticket to the quarter-final he picked the wrong game. It was a mistake repeated by thousands of Irish fans.

Confident that Ireland would top their pool and face South Africa in the last eight, many booked their seats well in advance. In the end, Japan’s win over Scotland last weekend means Ireland face New Zealand instead.

With the clock ticking down, however, hopes are not high of last-minute ticket deliverance, says Alcock. “Everybody is looking; anybody who has a quarter-final ticket has the wrong one.

The only people who have a ticket for the quarter-final are people who have tickets [for both games],” explained the 30-year-old, who found a job at An Solas Irish bar in Tokyo ahead of the tournament.

There he has been gently letting down fans in search of tickets. However, there is hope that Friday can bring better news when Irish and Japanese fans meet up to swap tickets.

“I have spent a fortune. I was only going to go to one game,” said the Corkman, who previously based himself in New Zealand for the duration of the 2011 World Cup.

Like every ticket-hunter, the Cork native has looked at a Facebook swap page, though the only real hope is from Scottish fans who bought tickets thinking that they were the ones who would end up against the Kiwis.

“I reckon they will just go to the game anyway,” says Alcock, who comforted at least a dozen Irish fans in the first five hours of a quiet Tuesday evening shift in Tokyo at An Solas.

“I have people from New York who I don’t even know asking me if I can get tickets. They just found someone who knows me [from working at the Beerkeeper bar in Queens] and they got onto me looking. They heard I’m out here.”

The Facebook Ticket Exchange page has advertised a three-hour event on Friday for swaps. By Tuesday evening more than 1,000 people had expressed interest.

“We have two category D tickets seated together for Sunday’s Japan Vs South Africa game in Tokyo and want to swap for two seated together tickets for Ireland Vs New Zealand on Saturday,” wrote one.

Facebook warns fans against dealing with certain traders, while they are urged to bring passports to an exchange as identification and only trade tickets bought legitimately. Face-to-face swaps are best, fans are told.

The stakes are high. On Viagogo, single tickets were selling for between €795 and €2,040 on Tuesday evening. Unlike other World Cup fixtures, the NZ-Ireland game is in demand.

On the Stubhub site, advertised prices ranged from €727 for the basic to €2,500 for the premium seats. Tickets advertised for almost €700 were already sold out.