‘I felt a failure as a mom,’ says Nuala Murray, who was refused a home care package for her daughter Hazel 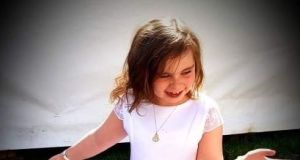 The mother of a nine-year-old girl with an intellectual disability and behavioural problems who has twice been refused a home care support package has spoken of having to go to a hospital emergency department in desperation when she was unable to manage her child.

Nuala Murray from Aghabullogue, Co Cork said “I felt a failure as a mom” when she turned to Cork University Hospital (CUH) for help two months ago.

Her daughter Hazel , who has autism and engages in self-harming behaviour like banging her head, “had a huge meltdown” in a restaurant in Killarney, Co Kerry.

She said: “When the doctors saw first hand what our life [was like] we were treated so well... She was admitted to the ward and they took over her care for four nights.”

The married mother of two said she always tried to “keep the brighter side out” but she hit a wall every six months or so, and had a path worn to the door of her GP in Coachford.

Organisations like the Cope Foundation, which on Wednesday warned of an unprecedented demand for its services, did amazing work but their resources were completely over stretched, she said.

The dental nurse has reduced her workdays and at one point had to take six weeks leave as she was so burned out.

“I just need a guarantee that we won’t be alone - that the services will be there,” she said.

“Hazel, like my other [teenage] daughter, is my life. They are your everything. It is hard on her.”

Ms Murray said being turned down for home care was a huge blow. She was told packages were only available for families in crisis but “I think we are a family in a crisis. We do need the best service possible for Hazel.”

She said her family was hugely grateful for the assistance of the early intervention team in Cope.

“My daughter wouldn’t be walking only for them. She reached milestones we didn’t think she would achieve.”

But she worries constantly about Hazel. “What would happen if my child died because of lack of services when she is banging her head. Who would pick up the pieces for me if that happened?”

Ultimately, she says she wants some peace of mind.

“My daughter is with me long term. She is my baby and will be with me forever.

“I don’t want to take away the personality of my daughter. I just wish that things were a little easier for us and her.”