Traveller history to be ‘obligatory’ in schools if new Bill passed 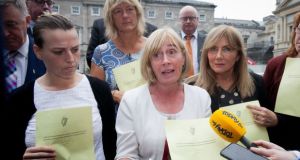 Senator Colette Kelleher (C) says a Bill which would make Traveller history and culture part of the curriculum at primary and secondary school is a ‘milestone’ piece of legislation. Photograph: Gareth Chaney/Collins

Traveller history and culture would feature as an obligatory part of the curriculum at primary and secondary school under a piece of legislation that is being debated in the Oireachtas.

The Seanad voted to passed draft legislation which would amend the Education Act by obliging schools to teach children about the history and culture of Travellers.

Senator Colette Kelleher, who produced the Bill, said that while Travellers have a long and proud history, young Travellers rarely see this reflected in the education system.

“At the same time, the wider community have had very little opportunity to learn about the diversity and wider context of Traveller culture and history,” she said.

“It would be transformative for Traveller children – and Travellers of all ages – to see their history honoured by inclusion within the school curriculum.”

Ms Kelleher said there is strong evidence of the need for changes to the education system to ensure Traveller culture is better reflected.

“The statistics in relation to Traveller education are stark,” she said. “Travellers are more than 50 times more likely than non-Travellers to leave school without the Leaving Cert. This situation needs to change.”

She said the value of the study of history in combatting prejudice and racism is well recognised. In addition, she said Travellers’ experience of racism is unacceptable.

According to research by Micheál Mac Gréil of NUI Maynooth in 2010, more than 60 per cent of people would not welcome a Traveller as a member of their family. The same research found that 63 per cent reject Travellers on the basis of their “way of life”, and almost one-fifth of people would deny Irish citizenship to Travellers.

“As a society, we must ensure we are offering inclusive and equal educational opportunities for all our young people,” Ms Kelleher said.

“We must show Traveller children that they are valued and recognised, and that their culture and heritage are celebrated within the school curriculum.”

However, Ms Kelleher expressed her regret at amendments that dilute the Bill’s provisions. She did not press for a Seanad vote on the four changes introduced by Minister for Education Joe McHugh to her Traveller Culture and History in Education Bill, which now moves on for debate in the Dáil.

“I’m disappointed,” Ms Kelleher said. But she added that “I do feel we have the basis of further conversation and we can do more work and that this Bill can go to the Dáil”, where she called on the Minister to champion it.

However, the Minister said elements of the Bill were legally problematic including a provision specifying that Traveller culture and history should be part of the curriculum. It would become the only subject area specifically prescribed to be taught, “granting it a different status from all other subjects, including Irish, English and maths”, he said.

The Government last year requested that the National Council for Curriculum and Assessment review the place of Traveller culture and history in the existing curriculum.

The then minister for education Richard Bruton also requested that intercultural education guidelines for schools – which are more than a decade old – be reviewed and updated to recognise the ethnicity of the Traveller community.