‘It’s something you don’t want to hear. You always think it happens in other places’ 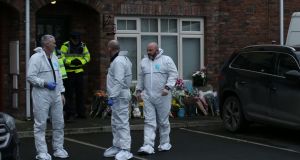 The scene outside the house in Newcastle, Co Dublin, where the three McGinley children were found last Friday. Photograph: Stephen Colllins/Collins Photos

The tragic deaths of three young children on Friday night left the community in Newcastle, west Co Dublin, struggling to find words to describe what had happened.

Siblings Conor McGinley (9), Darragh (7) and Carla (3) were discovered dead inside their home after 7pm in Parsons Court estate, near the village of Rathcoole.

Emergency services were called to the house after a taxi driver found the children’s mother, Deirdre Morley, on a road near the home in a disorientated state and brought her home.

She is said to have collapsed on the ground outside the home and an ambulance was called. A note was found at the house warning people not to go upstairs but to call 999 instead.

The children’s father, Andrew McGinley, a manager at a catering and facilities management company in south Dublin, returned home from work at about the same time.

The Garda said that ambulance personnel and responding gardaí discovered the bodies of the three children in the house, two upstairs and one downstairs.

It is believed the children were either sedated or poisoned and then suffocated.

Ms Morley, who is in her 40s, was brought to Tallaght Hospital where she received medical attention.

She worked as a paediatric nurse at Crumlin children’s hospital in Dublin but was on stress-related leave in recent months.

A spokesman for the hospital said that it would not be making any comment.

Mr McGinley released a photograph of himself with his three children over the weekend asking that it be used in any reporting of the case.

He was being supported by family and friends over the weekend following the tragedy that struck his family. The Garda appointed a family liaison officer to him and his extended family.

Over the weekend, Fr Kevin Doherty, co-parish priest at St Finian’s Church, near the family home, spoke about grief leaving “its calling card” with the community. He said “its calling card is one of darkness and loss and disillusionment”.

“We really can’t put words on it,” the priest said after addressing his congregation at 10am Mass in Newcastle on Sunday. Many young families attended the service.

“The darkness is so dark. It’s unspeakable. Grief, heartbreak, loss – it affects and touches every body in this community and I saw all the parents here. We had a Communion preparation Mass today and the parents coming – you could see the grief in their hearts as well.”

Darragh McGinley was due to make his First Holy Communion in the coming months. He and his older brother attended the local Gaelscoil, Scoil Chrónáin, in Rathcoole, while Carla attended a local pre-school.

The family were relatively recent arrivals to the Parsons Court estate. They previously lived in nearby Saggart and had only moved into the estate in the last year and a half or so, though the children were well known by locals because they played with other children on the estate.

A father-of-four who said his children played with the McGinley children in a local playground told The Irish Times: “They were just normal, little kids…they were out there playing and they were happy.”

The man, who lives close to Parsons Court with his family, said the community was “shocked”.

“It’s something you don’t want to hear. You always think it happens in other places. You don’t think it’s going to happen on your doorstep,” he said.

A book of condolences was opened at the local church for the McGinley children and a growing number of flowers were left at the home over the course of the weekend, after the first floral tributes were left at the scene early on Saturday morning.

One woman, who was pushing a buggy and carrying a large bunch of white and pink flowers to leave at the house, said: “I didn’t know the family but when I heard what happened, I just thought it was the right thing to do.

“I have been living in the area for two years and it is just horrific. Nobody can believe what has happened.”

“This is just an unthinkable tragedy; we have really tight-knit communities right across Newcastle, Rathcoole and Saggart. We are all just heartbroken,” she said.

Another local councillor, Francis Timmons, said there was “a sense of absolute numbness and sadness” around Newcastle in the wake of the deaths of the children.

“It is just horrendous. People don’t know what to say or do, or how to act,” he said.

“You don’t expect anything like that to happen on your own street. It is such a lovely part of Newcastle. You have to think of the families and how they are affected.”