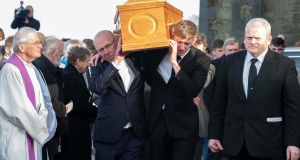 The family of 20-year-old Cork Institute of Technology student Cameron Blair, who was fatally stabbed earlier this month, remembered him at his funeral service as a kind and loving son and brother who can never be replaced but will always be sadly missed.

Hundreds of mourners, many visibly upset, packed St Peter’s Church in Bandon and the church grounds to show their support for Cameron’s grieving parents, Noel and Kathy, and his younger brother, Alan (17).

In a poignant tribute to his son, who died after being stabbed at a house party on the Bandon Road in Cork city on January 16th, Noel Blair told mourners of how proud he and his wife were of Cameron.

“Cameron, my darling son - when you were a small boy I used to call you ‘My buddy’. You grew up to be a fine young man and I was so proud to be your father,” said Mr Blair, his voice quaking with emotion.

“You lived life to the full. Positivity and kindness came naturally to you. You were a loyal friend, a protective brother, our beautiful boy. You were unique and nothing can replace you. Rest in peace, Cameron, until we meet again.”

Cameron Blair had attended Bandon Grammar School and school chaplain, Rev Anne Skuse, who led the funeral service, recalled the popular young man and how his “senseless death in an act of violence” had affected so many.

“We are all struggling with feelings of sadness, hurt and at times at anger and there are many questions as to how such a thing could happen, but Cameron’s parents are adamant today is not a day for questions or looking for answers.

“They want this day to a day of celebration of Cameron’s life and all that he was to so many people,” said Rev Skuse. She asked people to also remember Cameron’s grandmother, Phyllis, and the wider Blair and Donnelly families.

Cameron had travelled widely, including to China, and in the Blair home they had a photo of him at the Great Wall with the words of the Chinese philosopher Lao Tzu: “The journey of a thousand miles begins with a single step.”

“It may seem to us gathered here today that Cameron has only just begun his life’s journey, that he had taken only a few steps but his family do not wish to dwell on the shortness of his life but rather what he packed into that life,” Rev Skuse said.

“Cameron lived his life to the full, he took it with both hands and enjoyed every moment - he was strong, confident and brave - he had a sharp wit and a cheeky, cheerful smile that got him into, and out of, trouble.

“And he had within his soul a deep kindness and care for others; a generosity of spirit that shone so bright this week as so many people, both young and old, recalled small acts of loving kindness that he had shown to them.

“These acts of kindness were done quietly, without wishing to draw any attention to himself,” she said, adding such kindness was a reflection on those who loved and nurtured him and brought him to be the person he was.

Cameron’s mother Kathy paid tribute to her son with a paraphrased excerpt from WH Auden’s poem, ‘Stop all the clocks, cut off the telephone’.

“Cameron, you were my North, my South, my East, my West, My working week and my Sunday rest, My noon, my midnight, my talk, my song; I thought our world would last forever: I was wrong. Sleep peacefully my sweet child.”

And then his brother, Alan, paid tribute to Cameron with a poem he wrote in which he told of his brother’s kind actions, generous heart and active mind.

“I adored you since I was small and the day you left us was the saddest day of all. My keeper of secrets, you were loyal to the end and I always thought of you as my best friend,” Alan said.

“I never thought I would see the day when you were not there to show me the way, but it wouldn’t be your wish for me to be forever sad. So I try to remind myself of the happy times we had. Sleep tight Cam.”

At the close of the Service, Bishop Paul Colton of Cork, Cloyne and Ross, who confirmed Cameron in St Peter’s Church in 2013, said the Church of Ireland in Cork had received messages of sympathy from all over Ireland.

“Just over six-and-a-half years ago, I stood on this very spot and Cameron stood on the step there and I confirmed him. Never in our wildest imagination would we have thought we would be here today in such tragic circumstances.

“And so from our many backgrounds, so many people here, so many people not here but thinking of us from around this island of ours and beyond, I want to say to Kathy and Noel and Alan how our hearts are broken with yours.”

As Cameron’s remains were shouldered from St Peter’s Church by his family, his teammates from Bandon Rugby Football Club and Bandon Athletics Club formed a guard of honour on the journey to his final resting place in Kilbeg Cemetery.

Among the many people to pay their respects at St Peter’s were Tánaiste Simon Coveney; Mayor of Co Cork Christopher O’Sullivan; Cork Institute of Technology President Dr Barry O’Connor and Senator Tim Lombard.