Inside the extraordinary meeting between Pope Francis and abuse survivors

A US-based research group, BishopAccountability.org, have released a database of convicted Irish clergy but claim that the 90 names represent only seven per cent of the total accused priests. Video: Enda O'Dowd 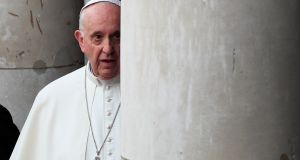 Pope Francis during his visit to Dublin last Saturday. The group expected a half an hour maximum, but the pope heard them out for an hour and a half. Photograph: Gonzalo Fuentes/Reuters

The most extraordinary meeting in the long history of the Catholic Church in Ireland was a hastily arranged affair.

Eight survivors of clerical abuse met Pope Francis at the papal nuncio’s residence on the Navan Road last Saturday evening. The invitations had only come a week before the visit, after constant entreaties from the Archbishop of Dublin, Dr Diarmuid Martin, to the Vatican asking that the pope make time to meet abuse survivors. The confirmation of the time and place only occurred the day before.

Those selected to attend were Clodagh Malone and Paul Redmond, who had both been born in mother-and-baby homes; Dublin city councillor Damian O’Farrell, who was sexually abused as a child by a Christian Brother; Bernadette Fahy, who had spent much of her childhood in Goldenbridge Orphanage; the well-known campaigner and victim of clerical sex abuse, Marie Collins; and an anonymous victim of the notorious paedophile priest Fr Tony Walsh.

There were also two priests in attendance, Fr Joe McDonald of St Matthew’s Church in Ballyfermot and Fr Paddy McCafferty of the Corpus Christi parish in Belfast. They too were victims of clerical sex abuse and are fierce critics from within the church.

They met in the Archbishop of Dublin’s residence in Drumcondra and were transferred to the papal nuncio residence in two people-carriers driven by a Garda escort.

At 5.15pm, after a long day that had begun 12 hours earlier, the pope entered a room with his translator Fr Mark Miles, a priest from Gibraltar who follows the pope everywhere.

There was nobody else and no security checks. The group were not asked to check in their mobile phones on arrival.

The eight were sitting in a circle. The pope sat in front of them. Fr McCafferty noted the informality of it, but the atmosphere was far from relaxed.

“We thought there would be 100 survivors in a room. We thought he would just give us a blessing,” said Ms Malone.

Mr O’Farrell said he had written his questions on a cue card believing that he would get no more than a minute or two of the pope’s time.

The group expected a half an hour maximum, but the pope heard them out for an hour and a half. Each of the eight survivors spoke in turn. The process was slow as it all had to translated back and forth.

The pope threw in the odd English word. He would also use the word caca the Spanish equivalent of “poo” to describe those who cover up abuse.

Ms Malone started by asking the pope to tell birth mothers who had been in mother-and-baby homes it was not a mortal sin that they went looking for their children. The pope’s interpreter wrote it down and the pope duly obliged during the papal Mass the following day.

Mr Redmond followed and told the pope that 100,000 mothers and babies from such homes had beeninvolved in adoptions in Ireland. The pope asked for clarification on the figure.

“He put up his hands to his head and started shaking his head,” Ms Malone recalled.

The pope told them that single mothers had babies taken off them in his native Argentina, but their children were given to relatives not strangers.

Mr O’Farrell recalled that the atmosphere was tense but civil. “It was robust, but he is an elderly gentleman. There was a recognition of that. It was very passionate. People spoke with their hearts.”

He pointed out to the pope that many victims get abused twice – first by the perpetrators and then by the religious orders who stonewall their efforts to get justice. He told the pope that he owed an apology to believers – “and I’m not one of them” – who found their faith mocked because of the actions of the institutional church.

The pope listened intently and then told a story about a letter he had sent to the cardinals before the conclave which elected him in 2013. “Jesus is knocking on the door not from the outside to give us inspiration,” the pope recounted. “He is knocking from within to get out of this church which is full of corruption and filth.”

Marie Collins resigned from the Pontifical Commission for the Protection of Minors last year in frustration with the Vatican Curia blocking reforms.

The commission had recommended the setting up a centralised Vatican accountability tribunal which would try bishops and cardinals who were suspected of covering up clerical sex abuse. The pope had agreed to this recommendation at the time.

Why then, she asked him in Dublin, had he not implemented it?

She would be bitterly disappointed by his eventual response, which came on the plane home to Rome when the pope accused her of being “fixated” on the idea and that it would not work with different standards in different churches.

Fr McCafferty was the penultimate speaker. He reminded the pope that he had told his congregation in Belfast just a few weeks previously that he should not come to Ireland. Instead he should stay in Rome and deal with the abuse scandals.

“He smiled at that. It lightened the atmosphere a bit,” Fr McCafferty said. Otherwise, he said the meeting was “highly stressful and intense. It was no cakewalk”.

Fr McCafferty spoke briefly and his message was to the point. He told the pope: “Those at the highest level of the Church who have covered up and dealt incompetently with these allegations of abuse should face just penalties. No one should be exempted from the dismissal from the clerical state which is the ultimate penalty”.

Being defrocked, Fr McCafferty explained afterwards, was the ultimate penalty for any member of the clergy.

Fr McDonald was the last to speak. He observed that the pope was tired at that stage. It had already been a long day.

Fr McDonald is one of the biggest critics of the Catholic Church, having penned the book Why the Irish Church Deserves to Die. He decided not to bring a copy of the book and instead handed the pope another provocative title, Five Years to Save the Irish Church.

He raised the issue of “clericalism” in the church, the notion that those bent on promotion in the Vatican were more interested in protecting the institution than getting justice for abuse survivors.

The pope responded by stating that cardinals, once they become corrupted, stay corrupted. He referenced several scandals in the church including that of Cardinal Theodore McCarrick, who resigned as a cardinal after multiple allegations of abuse (this was before Pope Francis was implicated in the scandal in a letter from a former American papal nuncio after the meeting) and also the long-running tumult in the Catholic Church in Chile over the cover-up of clerical abuse.

Fr McDonald said the pope looked like he was “bowed down” by the scale of abuse and could hardly believe what he was hearing.

“Speaking from a human perspective, I saw a man I believe was broken by this darkness. You have this old man listening to all of this, but in a strange way he was very strong. There was some resolve or strength or toughness in him,” he said. “He has a deep personal relationship with Jesus of Nazareth. If he didn’t have it, it doesn’t make sense.”

Fr McDonald said Francis should be forgiven for mixing up mother-and-baby homes and Magdalene laundries. “If we are honest, most Irish people don’t necessarily understand the nuances of that.”

At times during the meeting, some officials opened the door gently and then closed it again. Other than that, the 10 people in the room were left to their own devices.

Nobody told them to wrap it up, though the pope had a concert to go to in Croke Park and was running behind schedule. The pope finished with a prayer. Some of those present brought in religious medals and rosary beads for blessing.

Fr McDonald came away from the meeting believing the pope was serious about doing something about sex abuse.

“The immediate difference it made is that it shaped the penitential rite for the papal Mass,” he said.

“I was amazed at his engagement, his energetic, sustained interest, his obvious desire to understand, his repeatedly seeking clarification. I found in Pope Francis a man who knows Jesus.”