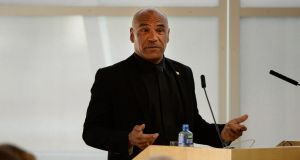 Presidential hopeful Kevin Sharkey has made a plea to be nominated as “Ireland’s first black president” to send out a message to racists and immigrants.

Artist and activist Mr Sharkey was one of five people to address Kilkenny County Council on Friday afternoon in search of a place on the ballot paper for the forthcoming presidential election.

There was also a pitch from Seamus Nolan, representing the William Delaney 1957-1970 campaign. William Delaney died in 1970 aged 13, three years into a six-year sentence at St Joseph’s Industrial School in Letterfrack, Co Galway

The presidential election will take place on October 26th. Nominations formally opened on Thursday and will remain open until September 26th. By then aspiring candidates will need nominations from either 20 Oireachtas members or four local authorities.

Mr Sharkey referred to his work highlighting institutional abuse, after suffering sexual abuse as a child. He claimed he “was the first man in Ireland” to call for the legalisation of civil partnerships for gay people. “I still believe that, to this day, I played a large part in opening up this conversation,” he said.

He said he gets asked a lot about racism, describing it as “one of the most awful things you could experience”. “I got called a n...er six weeks ago, where I live,” he added.

“To nominate a black president in Ireland, by the people, I can think of no better message to send, not only to the racists, but the people coming here looking for a better life.”

Pieta House founder Senator Joan Freemansaid she has been campaigning on mental health issues from the age of 17. “I’m standing here because I want to lead this country into a better way of life,” she said, adding that mental health and issues surrounding growing old in Ireland are among her key concerns.

“Our country can lead among the global partners and be the experts in health and wellbeing,” she said. She wants to hold a presidential forum on the issue and champion all of the organisations who deal with elderly people and mental health.

Gavin Duffy said he wanted to “harness” the type of “soft power” enjoyed by Irish presidents, which was exemplified by Mary Robinson and Mary McAleese in their work with the disenfranchised and in the North, but is not specifically written into the Constitution.

“All my life I have helped people to develop and express their talents,” he said, referring to his work with businesspeople, politicians, young people, and the “new Irish”.

“Like me, they have all had one thing in common: the dream to make a difference. With that experience, I believe I am ideally suited to harness the presidency’s soft power for the benefit of our people, but within the Constitutional framework,” he said.

In relation to the presence of two fellow “dragons” from the reality television series in the nomination race, Mr Duffy said: “I can understand the public being bemused, but I’m the one who turned up here today. I’m serious about this.”

The council will meet on September 10th, to hear from other candidates, including Marilyn Monroe impersonator Sarah Louise Mulligan, journalist Gemma O’Doherty and another “dragon” Peter Casey. The third “dragon” seeking a presidential nomination, Sean Gallagher, was not one of the names put before the councillors .