Pope Francis asks for forgiveness for abuses and exploitation 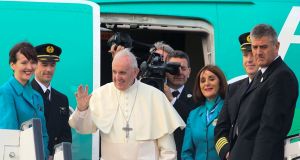 Pope Francis waves from the steps of his Aer Lingus jet during a farewell ceremony upon his departure at Dublin Airport in Dublin on Sunday evening. Photograph: Paul Faith/AFP/Getty Images 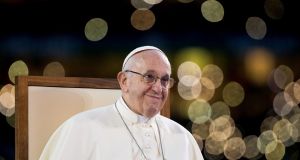 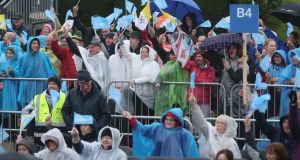 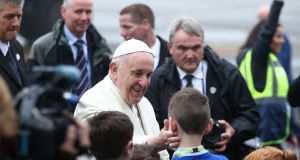 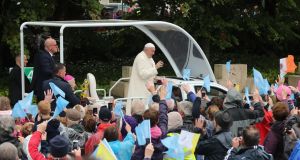 Pope Francis arrives for his visit to Knock Holy Shrine, in County Mayo to view the Apparition Chapel and to give the Angelus address. Photograph: Niall Carson/PA Wire 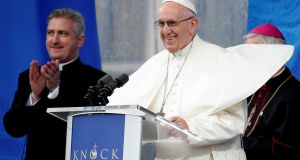 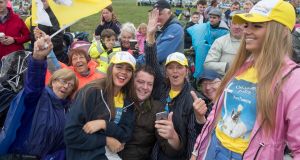 Crowds gather for the Closing Mass in Phoenix Park. A congregation of approximately 500,000 people have gathered. Photograph: Matt Cardy/Getty Images 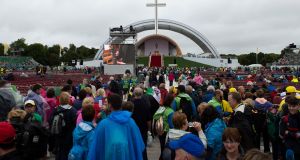 Members of the public arrive ahead of a Papal Mass of the World Meeting of Families at Phoenix Park. Photograph: Will Oliver/EPA 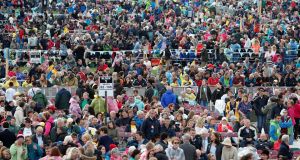 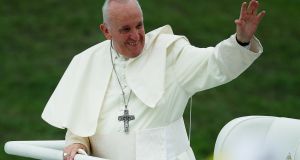 Pope Francis waves as he arrives at the World Meeting of Families closing mass in Phoenix Park. Photograph: Hannah McKay/Reuters 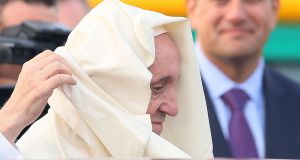 The wind catches his pellegrina as Pope Francis is escorted to his plane during a farewell ceremony upon his departure from Ireland at Dublin Airport on Sunday evening. Taoiseach Leo Varadkar is in the background. Photograph: Paul Faith/AFP/Getty Images

Pope Francis has made a plea for forgiveness at the closing event of a two-day trip to Ireland which has been dominated by the issue of sexual and institutional abuse.

During his 36-hour visit, the pontiff was forced repeatedly to address the decades-long scandal that has had a catastrophic impact on the church’s reputation and moral authority in Ireland and elsewhere.

A flight taking Pope Francis back to Rome has taken off from Dublin Airport, bringing to an end his historic two day trip.

The pope’s most significant statement while in the country came in the form of a penitential prayer said at Mass in Phoenix Park, the highlight of the trip. The pope listed specific forms of abuse, including sexual crimes, vulnerable women being forced by nuns to undertake manual labour, and forced or coerced adoptions. Each request for forgiveness was welcomed with applause by the crowd.

The pope’s plea came as a retired Vatican diplomat demanded Francis’s resignation, claiming he had failed to act on abuse allegations against a prominent figure in the church hierarchy.

There was a “conspiracy of silence not so dissimilar from the one that prevails in the mafia”, archbishop Carlo Maria Vigano said in a highly charged 11-page testament. He claimed Francis knew Theodore McCarrick, the former archbishop of Washington, “was a corrupt man, [but] he covered for him to the bitter end”.

Archbishop Vigano’s testament followed a wave of revelations, reports and resignations to hit the Catholic Church in recent months which threatens to engulf Francis’s papacy and has provided ammunition for his enemies in the Vatican.

Celebrating Mass at the Phoenix Park, Francis said: “We ask forgiveness for the abuses in Ireland, abuses of power, of conscience, and sexual abuses perpetrated by members with roles of responsibility in the church.

“In a special way, we ask pardon for all the abuses committed in various types of institutions run by males or female religious and by other members of the church, and we ask for forgiveness for those cases of manual work that so many young women and men were subjected to. We ask for forgiveness.”

The pope continued: “We ask forgiveness for the times that, as a church, we did not show the survivors of whatever kind of abuse the compassion and the seeking of justice and truth through concrete actions.

“We ask for forgiveness for some of the church hierarchy who did not take charge of these situations and kept quiet.

Ending the prayer, Francis said: “Give us the strength to work for justice. Amen.”

The crowd in Dublin included about 20,000 pilgrims from all over the world attending the Catholic Church’s World Meeting of Families, a global gathering held every three years.

Before leaving Ireland on Sunday evening, the pope told Ireland’s Catholic bishops they must address the problem of clerical child sex abuse with honesty and courage.

At the conclusion of his short visit, during which he publicly raised the issue of abuse on four occasions, he said a recurrent theme of his trip “has been the church’s need to acknowledge and remedy, with evangelical honesty and courage, past failures with regard to the protection of children and vulnerable adults”.

In a address to the Irish Episcopal Conference at the Dominican Convent in Cabra, Dublin, shortly before flying to Rome, he noted Irish church leaders have in recent years “resolutely moved forward, not only by undertaking paths of purification and reconciliation with victims of abuse, but also, with the help of the National Board for Safeguarding Children in the Church in Ireland, by establishing a stringent set of norms aimed at ensuring the safety of young persons”.

He said that in recent years “all of us have had our eyes opened to the gravity and extent of sexual abuse” in various social settings.

In Ireland, as elsewhere, “the honesty and integrity with which the Church chooses to confront this painful chapter of her history can offer an example and a warning to society as a whole”.

The number of people who attended the Phoenix Park Mass was significantly fewer than the 500,000 who had been anticipated by the organisers in the run-up to the event.

While the crowd did number in the hundreds of thousands, a combination of bad weather, ticketing issues and concerns about the transport arrangements to and from the event put off many people who would otherwise have gone.

While the World Meeting of Families has yet to release details of the actual attendance at the Mass, it appears likely that substantially less than 300,000 people were in the Park.

In the run-up to the event the organisers said they had allocated 20 minutes for communion, with as many as 4,000 servers recruited. That element of the ceremony was concluded in less than 10 minutes, suggesting a turnout which was less than half what was anticipated.

Aerial shots of the park also revealed many of the corrals set up in the shadow of the PapalCcross were less than half full.

A Garda spokesman said it would not be issuing details of crowd numbers, but did say a substantially smaller number of attendees would make follow-up operations aimed at getting people out of the park and onto public transport considerably faster.

“I had tickets, but travel plans put me off - also, I live in Kildare and my access route was North Dublin,” Tara O’Connor told The Irish Times.

“I was to go with my elderly mother but unfortunately she was taken ill this week, so unable to go. We’ve sat here watching it. Sad not to be there,” said Brenda Hearn.

“I was bringing my 83-year-old father but he is not able to walk great distances or stand for long periods,” said Teresa McGuinness. “So when we saw the routes and restrictions we had to cancel as he’d never make it to the site.”

Other would-be attendees identified issues with tickets for their no-show. “My tickets were not emailed out,” Niamh Ui Ghrada explained. “Also I have two young children and there was so much blurb about walking and waiting times that I decided it would be a nightmare to bring them - pity cos I was brought to Galway back in the day at a young age.”

The crowds were certainly far smaller than the circa 1.25 million who had come to see Pope John Paul II celebrate Mass in the park in 1979, and the aerial shots showed large swaths of empty spaces. Strong winds and heavy rain on Sunday morning may have been a deterrent.

Jim and Betty O’Neill were celebrating their 52nd wedding anniversary at the Mass with their two grandchildren, having set off from Belfast at 7am. “Pope Francis is very humble. I’ve been very impressed by his demeanour - I have an awful lot of time for him,” said Jim O’Neill (72).

“I would have loved him to have come North. A lot of people there are very disappointed. But it’s great to be here,” he said.

As Francis led people in prayer, survivors held protests elsewhere. Thousands of people turned out to support victims of sexual abuse at Dublin’s Garden of Remembrance, and a vigil was held at the site of a mass grave discovered at a mother-and-baby home in Tuam which contained the remains of almost 800 infants.

Survivors of abuse had been determined to ensure that the pope left Ireland with a deeper understanding of the trauma they have suffered and their visceral anger at the church’s complicity and cover up. – additional reporting: Guardian Service/PA