Sheriff Street gets luxury student complex, but no extra houses 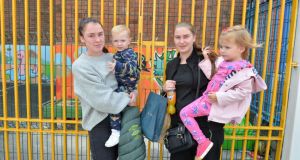 Stacey Spain with her son Korbin and Nicole Reilly with her daughter Kaiya on Sheriff Street. “I would’ve loved to get a place around here but there’s no houses,” said Ms Reilly. Photograph: Alan Betson

As the largest purpose-built student accommodation complex in the country opens on Saturday in Dublin’s north inner city, long-time residents in the area describe overcrowded housing, homelessness and wonder will affordable housing ever be provided.

Host – a student accommodation company – will manage almost 1,000 student beds, in two seven-storey blocks, on Sheriff Street at the Point Village. About 300 students will move in over the next week, paying between €220 and €360 a week for single rooms around shared living areas, or studios.

These are among more than 7,000 student bed-spaces in 44 developments that have been granted planning permission by Dublin City Council since 2016.

At their front door is a Luas stop, from where they can be in O’Connell Street in 10 minutes. Should they go the other direction they will find themselves at the other, residential, end of Sheriff Street.

Among those collecting children from the North Wall community creche on Sheriff Street on Friday was Nicole Reilly (20). “I’m originally from here. I had to move out of my mam’s because of overcrowding. I had to go homeless,” she says. She how lives in a Housing Assistance Payment-funded house in Ballymun. “I would’ve loved to get a place around here but there’s no houses.”

Stacey Spain (30), originally from the Sheriff Street flats – which were demolished in the early 1990s – and then Seville Place, lives in social housing on Island Quay.

“Unfortunately I had to move because there’s no housing here. I am on the transfer list for five years now – 413th on the list for a house around here. It is terrible.”

Others describe overcrowding in their homes. “People are fed up. Hotels, banks,” says Vincent Kavanagh, who shares a council house with two bedrooms and one box room with five other people. “As regards houses for ordinary people around here, nothing is being done.”

Gerry Fay, chairman of the North Wall Community Association, has run K&A Stores on Seville Place for over 30 years. He has been involved, as a community activist, in every initiative to regenerate the area since the demolition of the 500 flats in Sheriff Street. Citing “broken promise after broken promise”, he describes the arrival of hundreds of young people into the area as wonderful.

Figures from the council show there are 2,369 households on the area’s housing list. Local Worker’s Party councillor Éilis Ryan believes few if any of them will be housed here.

“There’s no land left to build housing. Every site has been bought and you can be sure no developer is interested in social and affordable housing. The big profits are in hotels, student accommodation, offices and luxury apartments. The vast, vast majority of people on the list will have to leave the area.”

According to architect and housing policy analyst Mel Reynolds, the reason student accommodation is so attractive to developers is that the rent turnover per square metre, compared with housing, can be eight times as high.

“Add to that there’s no requirement for parking spaces or to provide 10 per cent of units for social housing,” he says, before dismissing arguments that purpose-built student accommodation will “free-up” housing now used by students.

“These luxury student apartments are being built for the 44,000 international students the Government is targeting by the end of next year.”

The Department of Education’s 2016 strategy, Globally Connected, says: “The economic value of international students is measured on an output impact basis and shows that the sector is now worth a minimum of €1.55 billion per annum to Ireland. ”

Retired Dublin City Council senior planner Kieran Rose views the proliferation of purpose-built student accommodation favourably. “They are being built on vacant sites, in parts of the city that have been very depressed. They bring life and money into the area.”

The council, in its 2016-2022 Development Plan, says: “To plan for future expansion of third-level institutions and to accommodate growth in the international education sector, there is a need for appropriately located high-quality, purpose-built and professionally managed student housing schemes.

“For the inner city, the plan seeks to strengthen and consolidate the robust city-centre mixed-use zoning with active promotion of the inner city as an attractive place for urban living, working and visiting.”

Mr Fay, from behind his shop counter, wonders for whom this “attractive” inner city is planned. “We are standing on some of the most valuable real estate in the country. I believe what we’re seeing here is managed dismantlement and decline of the working class community here.”