Papal Mass: Pope asks for forgiveness for abuses and exploitation 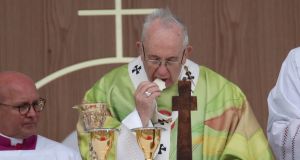 Pope Francis attends the closing Mass at the World Meeting of Families at Phoenix Park in Dublin. Photograph: PA

Pope Francis asked for forgiveness for the abuses perpetrated by the Catholic Church in Ireland, by clergy and those in religious institutions, during his papal Mass in the Phoenix Park.

The pope told the tens of thousands gathered he asked for forgiveness for “the abuses in Ireland, abuses of power, conscience, and sexual abuse perpetrated by those with roles of responsibility in the church.”

“We ask for forgiveness for those places of exploitation of manual work, that so many young women and men were subjected to,” he told the crowd.

“In a special way we ask pardon for all the abuses committed in various types of institutions run by male or female religious, and by other members of the Church,” he said.

“We ask forgiveness, for the time that as a Church we did not show the survivors of whatever kind of abuse compassion, in the seeking of justice and truth, and concrete actions,” he said.

Following his comments the crowd broke into applause. Pope Francis, wearing a green vestment and speaking on the stage set up under the papal cross, said: “we ask forgiveness for some members of the Church hierarchy, who did not take charge of these painful situations and kept quiet.”

“We ask for forgiveness for all those single mothers who were told that to seek their children that had been separated from them … that this was a mortal sin, this is not a mortal sin,” the pontiff said.

While organisers said they expected 500,000 people to attend the Mass the turnout appeared to be significantly lower on Sunday, in part due to the poor weather on the day.

Shortly after 2pm Pope Francis arrived in Phoenix Park riding in the popemobile. He waved as he was driven around the crowds gathered in the park. The crowds greeting him were a flurry of coloured ponchos and yellow and white papal flags.

To provide communion to all those gathered in the park, up to 200 chalices and 4,000 ciboria, which holds the Eucharist, were required.

Delivering the homily of the mass, Pope Francis said the teachings of the church were at times challenging to follow.

“If we are honest with ourselves, we too can find the teachings of Jesus hard. How difficult it is always to forgive those who hurt us; how challenging always to welcome the migrant and the stranger,” he said.

“How inconvenient to protect the rights of the most vulnerable, the unborn or the elderly, who seem to impinge upon our own sense of freedom,” Pope Francis said.

Emma Mhic Mhathúna, a mother-of-five who was one of the women involved in the CervicalCheck cancer screening programme controversy, brought up one of the offertory gifts at the Mass. Ms Mhic Mhathúna, from Co Kerry, was accompanied by her children.

Olive Foley, the widow of former Irish rugby international and Munster coach Anthony Foley was also involved in the offertory procession, with her children Dan and Tony.

Also taking part in the procession was the family of a victim killed in the Omagh bombing in 1998.

Also addressing the Mass was Archbishop of Dublin Diarmuid Martin who said people had been “wounded in the depth of their being” by clergy.

Welcoming Pope Francis at the final public event of his visit, the Archbishop told the pope 39 years after the last visit of a pontiff it was “commonplace to say” that he had come to “a different Ireland.”

“The Church in Ireland has gone through challenging times. People have been wounded in the depth of their being by Church people; people’s faith has been challenged and the Church of Jesus Christ has been wounded,” he told the pope during the Mass.

Referring to the towering papal cross behind the temporary altar, first constructed for the visit of Pope John Paul II in 1979, Archbishop Martin said the cross was “probably never intended to be a permanent memorial.”

There were “times when people asked that it be removed,” he said, and “times when this cross appeared starkly isolated in the bleakness of an Irish winter.”

“In these years Ireland has had its winter moments but also its moments of spring. Those of us who know what an Irish winter is like - and we have had good experience of that this year - know also what happens when the first rays of spring sun emerge: Ireland changes,” he said.

“Today we gather around the same cross in the hope of a spring for the Irish Church. We look towards a spring sun that does not wish to cover up the harshness of dark days.

“We wish rather to help families realise anew that the future of Ireland needs the light of message of Jesus Christ to reappear in all its simplicity and hopefulness.”

The papal Mass concluded the church-organised World Meeting of Families, and it was announced the next congress would be held in Rome, in 2021.