Thousands turn out for protest over clerical abuse 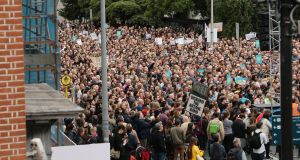 The Stand4Truth protest at the Garden of Remembrance in Dublin which was held at the same time as the Papal Mass at Phoenix Park. Photograph: PA 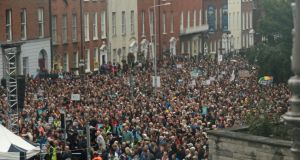 Part of the crowd from the Stand4Truth protest at the Garden of Remembrance in Dublin which coincided with the Papal Mass at Phoenix Park. Photograph: PA 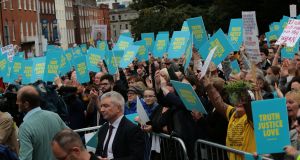 The Stand4Truth protest at the Garden of Remembrance to coincide with the Papal Mass at Phoenix Park. Photograph: PA

Survivors and their families were among thousands of people who attended a rally in solidarity with victims of clerical abuse in Dublin.

The Stand4Truth event was described as “emotional”, “powerful” and “moving” by some of the estimated 5,000 attendees.

The protest - which was called last week by Colm O’Gorman, chief executive Amnesty International and a survivor of clerical rape - began in Parnell Square at the same time the Papal Mass was beginning in the Phoenix Park on Sunday afternoon.

Between performances by such artists as Hozier, Brian Kennedy, Róisín O, Mary Black, Liam Ó Maonlaí and Villagers, Mr O’Gorman explained why he organised the event.

He said the event was not a protest but a remembrance and a promise that “we will never forget”.

“So that the words Ryan, Ferns, Murphy, Cloyne, Tuam, Magdalene don’t become tomes on the shelves of Government departments...they become memories of people that we failed and whom we love.”

In a powerful spoken-word performance, actor Grace Dyas said there was a part of her, us all and of Ireland, “that is very well...and a part that needs to recover”.

She spoke of how abuse survivor Christine Buckley, who founded the Aislinn Centre for victims and survivors, told her that she said to everyone who came to the centre: “Before you open your mouth, I believe you.

“I believe you. I believe every word you are about to tell me.

“I believe you before you open your mouth.”

Sarah Clancy read her poem Cherish, including the lines: “Cherish the shame they implanted in whole generations/Cherish the suicides - collateral damage in an otherwise virtuous struggle/Cherish the ring-kissers who made it all possible.

“Cherish the men because they couldn’t help it if the women went and fell pregnant/ Cherish the foetus, the heartbeat but not the person it’s in/ Cherish the graves in those undisclosed wastlands/Cherish the shovels and the boots-soles that dug them/ Yes we can, cherish the children if they’re from the right class/ But not seeking asylum or not, God forbid, Travelling people.”

Thousands in the crowd held aloft blue and yellow A4-sized cards, with the words “Truth, Justice, Love” while others had banners with such slogans as “Secular justice for all”, “The Church protects pederasts” and “Stand with victims, not abusers.”

The then crowd walked silently to the site of the last Magdalene laundry on Sean McDermott Street, which closed in 1996.

Mr O’Gorman said the laundry building must be “preserved as a place of remembrance and conscience”. Its owner, Dublin City Council, however plans to sell it to a Japanese hotel chain.

Among those there was Veronica Letsome, who had travelled from Wexford “to honour” her birth-mother who had been in the laundry, and left in 1980.

“I have never met her, but I have found siblings she also had before she got married. I found today very emotional. Looking at that building is very hard.”