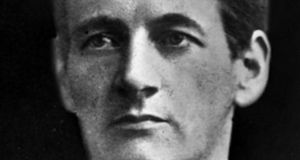 Terence MacSwiney was sentenced to two years in jail on August 16th 1920 for possession of ‘seditious documents’.

The international impact that Lord Mayor of Cork Terence MacSwiney had when he died in hunger strike in 1920 in Ireland’s struggle for freedom will be recalled on Monday in an event to commemorate Indian independence.

MacSwiney, who was elected Lord Mayor of Cork in succession to his friend, Tomas MacCurtain when he was murdered by the RIC, was sentenced to two years in jail on August 16th 1920 for possession of “seditious documents”.

He told his court martial by the British authorities that he had taken no food since his arrest four days earlier. “I shall be free, alive or dead, within a month,” said MacSwiney, who was also a Commandant of the Cork IRA.

At the time, it was generally believed that a person could not live more than a month without solid food but MacSwiney garnered huge international attention for the Irish cause as he continued on hunger strike in Brixton prison.

He died some 74 days later on October 25th, 1920 with his death sparking protests not just among the Irish Americans in cities such as New York, Boston, Philadelphia and Chicago but also in Europe including in Barcelona.

Among the many political activists influenced by Mac Swiney’s death was Vietnamese leader, Ho Chi Minh, who was working in London at the time and said of him: “A nation that has such citizens will never surrender”.

A collection of his writings, entitled Principles of Freedom, was published posthumously in 1921 and it had a huge impact, particularly in India where Jawaharlal Nehru took inspiration from MacSwiney’s example and writings.

Mahatma Gandhi also admired Mac Swiney, acknowledging his influence in his implicit reference to his death on hunger strike, when he wrote: “It has been the magnitude of the Irish sacrifice which has been the deciding factor.”

The Indian revolutionary, Bhagat Singh was also an admirer of MacSwiney and wrote about him, recalling how he told his father about MacSwiney when his father petitioned the British Government in India to pardon him.

Bhagat Singh, who was executed in 1931 for killing a British officer, quoted MacSwiney and said “I am confident that my death will do more to smash the British Empire than my release” and told his father to withdraw the petition.

“The life and writings of Terence MacSwiney struck a chord with people all over the world in the aftermath of World War I – people seeking freedom for their own nations,” said Mr Ronayne.

“He was described as inspirational by the father of the Indian nation, Mahatma Gandhi who had returned to India five years earlier to devote his life to making his native country free of the British Empire.”

Mr Roynane will deliver his address as part of Cork City Council’s Decade of Centenaries programme with the Indian Ambassador, Mr Sandeep Kumar and the Lord Mayor of Cork, Cllr John Sheehan among those scheduled to attend.

India’s Republic Day honours the date on which the Constitution of India came into effect on January 26th 1950 and Mr Kumar will also speak about India’s relationship with Ireland at the event which takes place at Cork City Hall.

The celebrations will include an Irish ballet/Indian Bollywood Fusion Dance Performance by students of the Joan Denise Moriarty Dance School, an Indian medley dance by the Cork Indian Dance Troupe and some modern Indian dance.