Missing team raises eyebrows in Limerick, while Belfast promotes itself as ‘city of equals’

Organisers of the Dublin parade estimated that about 500,000 spectators lined the streets of the capital for a parade billed as a “celebration of Irish storytelling”. Video: Kathleen Harris 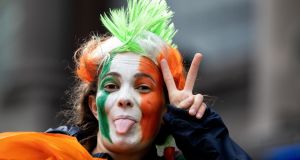 Hundreds of thousands of people attended St Patrick’s Day parades across Ireland on Sunday as bright sunshine across most of the island created ideal conditions for participants and spectators alike.

Organisers of the Dublin parade estimated that about 500,000 lined the streets of the capital for a parade billed as a “celebration of Irish storytelling”.

More than 3,000 participats walked the parade route which had comedians Deirdre O’Kane and Jason Byrne as grand marshalls.

For the first time, the Irish Air Corps conducted a flypast as part of the celebration with three aircraft flying from north of O’Connell Street at 650ft, over the Spire towards O’Connell Bridge, before turning towards Dublin Bay, flying over the Aviva Stadium and returning for a second flypast at a lower altitude.

The festival continues on Monday with a programme of events at Merrion Square between 12pm and 6pm and at other venues across the city.

Given what his compatriots did to Ireland in the Millenium Stadium in Cardiff on Saturday, St Patrick got a surprisingly warm welcome from the people of Cork when they turned out in their thousands to honour him on the streets of Leeside.

The two brothers from St Luke’s in the city marched with the Cork City Fire Service contingent but broke away momentarily as they passed the reviewing stand to present a bouquet of flowers to their proud mother, Maria.

Cork’s growing multiculturalism was evident in the many immigrant groups to take part including a number from Eastern Europe, amongst them members of the Polish Community in Cork and members of the Hungarian Community who were led off by medieval archer and horseman, Zoltan Gere.

“I used to live in Cork but now I live in the midlands - it’s my fourth time taking part in the Cork parade,” said Zoltan whose expertise with a whip, which he cracked to send the air snapping as if rife with gunfire, had both children and adults alike gasping in awe.

Spraoi from Waterford went down a treat with their take on matters Cork including a giant prancing goat, representing the animal used by eccentric Cork entrepreneur, Attiwell Hayes to draw his chariot at a masquerade ball in the 18th century which gave rise to the old Cork saying “as old as Atty Hayes’s goat”

And they also had their own take on that more familiar word of Cork’s slang - “ya langer” with a giant model of a langur monkey, whose irritating behaviour in India was observed by members of the Munster Fusiliers who, when they returned to Cork, were quick to refer to any annoying person as “a langer”.

St Patrick was out in force on Saturday too when exactly 158 Paddys, Pats, Patricks, Patryks and Patricias braved inclement weather to dress up as Ireland’s patron saint to mark the re-opening of a bridge named in his honour over the River Lee 158 years ago.

Cork City Council, which contributed to the €1.2 million restoration of the Victoria bridge that links St Patrick’s Street in the city centre with Bridge Street in the city’s Victorian quarter, came up with the novel ideal of inviting 158 Patricks, or variants of, along for photo shoot to mark the re-opening.

An estimated 40,000 people turned out to see the Limerick city parade, led by grand marshall Dr Norah Patten who is bidding to be the first Irish astronaut.

But the talk on many people’s lips was the absence of the All-Ireland hurling champions from the event.

Last August the hurlers were paraded through the city’s streets in an open top bus after bringing the Liam MacCarthy Cup back on Shannonside following a 45-year hiatus. However, in what many in GAA circles have seen as a snub by the local authority, the team was not asked to take part in the parade.

Local mother of two Vivienne Vereker Campbell who braved the chilly air to watch the floats said while the parade was colourful and fun she was “very disappointed the Limerick hurlers weren’t involved”.

“The parade flowed well but the hurlers were definitely missed. They should have been there,” she said.

The Limerick-based Lumen Street Theatre group dazzled the crowds with a spectacular space entry and rocket lift off to reflect this year’s theme celebrating the 50th anniversary of Neil Armstrong’s moon landing, and “Limerick’s dynamic revitalisation in recent years”.

And the fun doesn’t end there. Around 1,300 musicians from 20 marching bands will parade through the city from midday this bank holiday Monday as part of the city’s 49th International Band Championship. A giant sparkling Ferris Wheel will be providing panoramic views of the city until April 21 at Arthur’s Quay Park, and a giant moon which landed in St Mary’s Cathedral last week can be explored until March 22nd.

An estimated 30,000 spectators were in attendance for the county’s main parade in Galway city, which assembled under the theme of “diversity”.

This year’s parade, the 119th in the city, was shortened due to proposed roadworks on Shop Street but that didn’t deter the crowds.

Eoghan Clifford and Shane Curran were the guests of honour. Clifford is a former world champion paralympic athlete who has won Paralympic and World Cup gold medals. Curran won a silver medal in the shot putt at February’s IWAS World Games in the United Arab Emirates.

Macnas led the parade in which around 50 groups that took part including representatives for the indigenous people of Biafra and the Galway Traveller Movement.

Crowds were smaller at parades in Loughrea and Athenry amid rain showers, and the lure of Croke Park where Corofin and St Thomas were competing in the All-Ireland football and hurling club finals.

Belfast adopted the theme “city of equals” for this year’s parade, which saw an array cross-community performers including Irish dancers, drum bands, community and youth organisations.

Sinn Féin lord mayor Deirdre Hargey said “city of equals”, which was also the theme for her year in office, was about “making sure there is space for everyone in the city no matter what their perspective, background or narrative is”.

St Patrick’s Day was “a day for everyone, for all communities to come out and celebrate the patron saint of Ireland” she added.

Ms Hargey was asked about how this sat with Sinn Féin president Mary Lou McDonald marching behind a banner reading “England get out of Ireland” in New York. The lord mayor said people interpreting this as meaning Sinn Féin’s position was “English out” or “Brits out” were wrong.

“No,” she said. “The bigger message is around people on the island of Ireland being able to determine their own future. It should be down to the people here. Economic powers and all powers should be resting with the people of Ireland and government here.”

Freddie Carlisle from the Major Sinclair Memorial contest and pipe band said they loved taking part in the Belfast parade. “It is cross community,” he said.

“We have no problem being involved. It is part of our heritage as well.”

Binu Manuel from Indian Beats drumming group took part in the Belfast parade for the first time this year. He said they wanted to be involved, “because we are part of Ireland too”.

Young people were the focus of this year’s St Patrick’s Day celebrations in Derry.

More than 700 performers, the majority of them children and young people, took part in Tír na nÓg themed parade.

Garden gnomes, Little Bo Peep and a crowd of fluttering butterflies mingled with gung-ho grannies on motorised shopping trollies, while several little red riding hoods took their lives in their hands and chatted to the big bad wolf.

Watched by more than 10,000 people, the parade was the climax of two days of celebrations as part of Derry City and Strabane Council’s Spring Carnival, which also featured the annual Ubuntu Global festival, which celebrates diversity and inclusion through traditional music, song and dance from around the world.

Among those at the head of the parade was 12-year-old Clara Clements from the Rainbow School of Dance in Eglinton, Co Derry.

Playing the role of Aoife, the enchantress who turns the children into swans, she co-ordinated the younger members of the troupe, who performed their swan dance through the streets.

“I just love dressing up and being able to dance, it’s so much fun,” she said.

Other young people had chosen to highlight the issues that matters to them.

The teenagers of Enagh Youth Forum, just outside Derry, had dressed up in hazardous materials suits and were wearing gas marks.

Their placards read: “Zero Waste Now”; “Our Voice Matters” and “Votes at 16” as well as two referring to local environmental campaigns – “Build Strathfoyle Greenway” and “Clean Up Mobuoy Dump”.

Parades and celebrations also took place in Armagh, Downpatrick, Enniskillen, Newry, Strabane and other towns and villages across the North.

The Kingdom’s parades stretched from the early hours to late afternoon. From Abbeydorney to Waterville, crowds turned out in huge numbers as the anticipated bad weather held off.

While Ballydavid in west Kerry stole a march with its one-minute-past-midnight parade, followed by Dingle’s 6am pre-dawn fife and drum show, the rest of the county was bathed in colour.

In Killarney, thousands of people lined the streets for a parade whose theme was the circus. There were lots of red noses and much clowning around but it was the Germans who stole the show - coursessy of three marching groups from towns with Kerry connections.

More than 40 groups marched in Tralee where the 60 years of the Rose of Tralee festival was celebrated.