Man in his 60s pronounced dead at scene near Kilbeggan, Co Westmeath 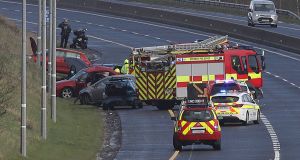 One motorist has been killed and several others injured in a five-car crash on the M6 motorway, near Kilbeggan, Co Westmeath.

The driver of one of the cars, a man in his 60s, was pronounced dead at the scene. A female passenger in his car was also injured.

A further 10 people were injured in the crash, which occurred after the eastbound junction five, near Kilbeggan, on the M6 motorway. It is understood the area was hit by heavy fall of hail at the time of the crash.

One passenger sustained what were termed “serious injuries” and was brought by helicopter to Beaumont Hospital in Dublin, a Garda spokesman said.

Of the other nine people injured, four were drivers of the vehicles involved and five were passengers. They were taken to Midland Regional Hospitals in Mullingar and Tullamore for treatment.

The motorway was closed off for a period on Sunday afternoon, while emergency services attended the scene.

Shortly afterwards, gardaí reopened the westbound carriageway, but the eastbound stretch between junction four and five remained closed off, with diversions in place.