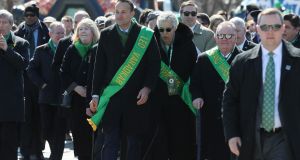 Taoiseach Leo Varadkar at the Chicago St Patrick’s Day parade in the US on Saturday. Photograph: Brian Lawless/PA

Children in Irish schools should be taught the national anthem, Taoiseach Leo Varadkar has said, though he stopped short of calling for it to be mandatory.

Speaking in Chicago on the final day of his annual St Patrick’s Day visit to the United States, the Taoiseach said that he had been taught the national anthem in primary school.

But he added: “I don’t think I would go down the American route, you know the pledge of allegiance at the start of the day, I’m not sure that would really fit in with the Irish culture. But the words of the national anthem – I think that is something every kid should learn in primary school.”

Mr Varadkar was speaking after marching in the St Patrick’s parade in Chicago on Saturday, an event that was overshadowed by the participation of MMA fighter Conor McGregor.

McGregor arrived at the start of the parade route minutes before it began and was brought to the front where he was robed with a sash and marched alongside Chicago’s mayor Rahm Emanuel.

The Taoiseach and government officials were not aware that the controversial sportsman had also been invited to join the parade. A spokesman for the Taoiseach said they had sought clarification from the organisers on McGregor’s participation. “There was no interaction with Conor McGregor,” the spokesman said.

and #ConorMcGregor has also arrived at the #Chicago #StPatricksDay parade... pic.twitter.com/XiYejEJ1lJ

Mr Varadkar spent much of the parade walking towards the opposite end of the front row, but did join Mr Emanuel at one point in proceedings.

Later in the day, Mr Emanuel, whose brother Ari is an owner of the Ultimate Fighting Championships, tweeted a picture of himself marching alongside McGregor: “Marching in the 64th annual St Patrick’s Day parade with a special visitor @TheNotoriousMMA.”

The tweet appeared to have been deleted later in the evening and replaced with several tweets thanking the Taoiseach for attending.

Speaking after the parade, the Taoiseach said he had not been aware that McGregor would be attending. “I imagine the parade organisers invited him,” he said, adding that he did not speak to him.

Asked if it was appropriate that McGregor , who struck a plea deal with prosecutors following an incident in New York last year, was representing Ireland, Mr Varadkar said: “I think that is up to the organisers of the parade to decide who they want to march in the parade.

“I don’t think he was representing the country, that’s kind of what I was doing and Mr Ring,” he said, referring to Minister for Rural and Community Development Michael Ring, who is in Chicago with the Taoiseach.

McGregor, who avoided jail last year after reaching a plea agreement with prosecutors in Brooklyn, was charged with “strong-arm robbery and criminal mischief” earlier this month following an incident in Miami.

Mr Varadkar also commented on the remarks he delivered at his breakfast with Christian conservative US vice president Mike Pence on Thursday, which have attracted global attention. Mr Varadkar attended with his partner, Matthew Barrett.

Asked if he had been nervous ahead of the visit he said: “No I wouldn’t say I was nervous, but I gave consideration about what I was going to say and how I was going to say it. Ultimately Matthew and I were guests at his home so I wanted to make sure what I had to say was respectful, and I hope it came across that way.” He added that he wanted to express “what are now Ireland’s values, that everyone is equal before the law regardless of their religion, or lack thereof, their gender, the colour of their skin, or who they love”.

He said he hoped that Mr Pence and his family, who have strong Irish roots, would take up his invitation to visit Ireland.