St Patrick's Day Parades: What you need to know

Festival organisers are urging people to get to town early 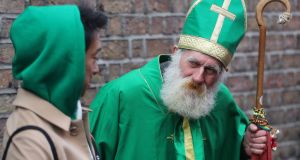 St Patrick’s day is here once again and main parade in Dublin started at 12pm.

The traffic restrictions and road closures will be in place until 6pm this evening.

The following roads are subject to restrictions:

Merrion Square south will be closed until 6am on Monday to accommodate the St Patrick’s Festival Funfair.

There will also be some disruption to Luas services today on both the Red and Green lines.

The stops on the Red Line closed until 3pm are:

Trams will operate from Tallaght/Saggart to Smithfield from 10:45am to 3pm. Full Red Line services will resume after 3pm.

The stops on the Green Line closed until 3pm are:

A float of an ATM been removed from a bank using a digger is a highlight in the Cavan parade #StPatricksDay pic.twitter.com/IabmJUKSzW

Trams will operate from Brides Glen to St Stephen's Green and from Broombridge to Dominick from 7am to 6pm. Full Red Line services will resume after 3pm.

This year’s theme is "storytelling" and performers inspired by it will feature throughout the parade.

The rebel county's parade will start at 1pm running from South Mall to Grand Parade, up St. Patrick's Street and finishing off at Merchant's Quay.

The theme this year is "Cork stories".  There's plenty to do around the city after the parade including  The Lee Sessions in pubs around town,  you can visit some of their top attractions or discover the city on foot with Cork City Walks.

One of the longest running St. Patrick's day parades in the country kicked off at 11:30am this year. The theme this year is "diversity".

Limerick's "One Giant Leap" theme is slightly different to others this year by celebrating the 50th anniversary of Neil Armstrong's  moon landing.

Their Grand Marshal will be Dr Norah Patten who is in the running to be Ireland's first astronaut.

The parade started at 12pm.

Keeping with the lunar theme, you can see artist Luke Jerram's lastest artwork  which brings together moonlight and lunar imagery with sound. The exhibition honours the lasting effect the moon landing has had  on the world.

You can check out Museum of the Moon until March 21st.