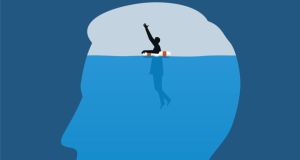 Just 29 per cent of service users said they had a good experience of HSE mental health services overall. Illustration: iStock

High levels of dissatisfaction with mental health services provided by the HSE among users and their families and carers are revealed in two surveys published on Wednesday.

A poor experience of services, a failure to treat patients with dignity, frequent changes of staff and a high focus on medication are among the issues raised by large numbers of those surveyed.

Service users were also unhappy with the complaints process, with half of those surveyed saying they wanted to complain but did not, and half of those who did complain reporting that nothing had been done in response.

Campaigners say the results show people using mental health services are not routinely getting the services envisaged in the landmark policy A Vision for Change, published 13 years ago.

Mental health services have traditionally been the Cinderella of the health services, and improvements have been slow in coming despite ring-fenced budgets in many years, often because of difficulties recruiting staff.

The research was conducted by Mental Health Reform, funded by the HSE and will be launched on Wednesday by John Farrelly, chief executive of the Government’s Mental Health Commission.

“These two surveys demonstrate we still have some way to travel to ensure the service user is at the heart of mental health care in Ireland,” according to Mr Farrelly. “Ensuring all people using mental health services are treated with dignity and respect must be a key focus for the country’s services providers.”

Just 29 per cent of service users said they had a good experience of HSE mental health services overall, with 42 per cent saying their experience had been poor. One in five users of community services, and one in 10 users of inpatient services, said they were not treated with dignity or respect.

Even in crisis care, almost half of those who had gone to emergency departments for help said they did not get the supports they needed.

Overall, six out of 10 people reported a high focus on medication as part of their treatment and care, and one-third said they were not involved as much as they would have liked. However, six out of 10 said they had been referred to “talking therapy” by community mental health services.

“It is also very concerning that those who support someone with a mental health difficulty, including family members and other supporters, reported high levels of dissatisfaction with the information provided to them by mental health services.”

This separate survey of almost 800 people found two out of every three family members or supporters were dissatisfied with the information and advice they received, even in a crisis. Half said none of their views were incorporated into the recovery or care plan of the person they were supporting.