No politician has managed to grasp this poisonous thorn 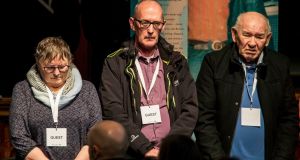 From left: Jean Hegarty, sister of Kevin McElhinney, John Wray, brother of James Wray, and Paddy Nash, brother of William Nash, stand for a minute’s silence with other families of those who were killed, ahead of a press conference inside the Guildhall in Derry. Photograph: Liam McBurney/PA

There was some uncertainty among the Bloody Sunday families gathered in Derry’s Guildhall after they learned that of the 17 surviving former British paratroopers in the frame for the killings just one, Soldier F is to face prosecution.

What line should they take? In the lead-up to the Public Prosecution Service’s decision given to them shortly after 10am on Thursday, considerable expectation had built up that perhaps four or even more former soldiers would be charged in relation to the 14 people who died as a result of the Bloody Sunday shootings.

A large crowd gathered in the Guildhall to hear the families’ verdict, to take their direction. Words would be important here. The main spokesman was John Kelly, whose 17-year-old brother Michael was one of six people shot dead at the rubble barricade on Rossville Street on January 30th, 1972.

For years John Kelly campaigned to get justice for his brother and for the others killed and injured on Bloody Sunday. It’s probably fair to say he was the man who was carrying the most anger over the killings – close to half a century of anger – and he wanted the full weight of the law visited on those responsible for the 14 deaths, especially Soldier F, who Lord Saville in his 2010 report judged was Michael Kelly’s killer.

That seemed clear because the bullet taken from Michael Kelly’s body was linked to Soldier F’s rifle. But as the North’s director of public prosecutions Stephen Herron told the families, the evidence given to Lord Saville was inadmissible and the standard of proof in any criminal trial was a very high one and there was “no admissible and credible witness evidence that Soldier F fired at the rubble barricade”.

Mr Herron tried to soften the blow of the PPS’s overall findings that just one soldier will be prosecuted when he said the decision not to prosecute other soldiers in “no way diminishes any finding by the Bloody Sunday Inquiry that those killed or injured were not posing a threat to any of the soldiers”.

Soldier F is to be prosecuted for the murder of James Wray and William McKinney and for the attempted murders of Joseph Friel, Michael Quinn, Joe Mahon and Patrick O’Donnell.

John Kelly couldn’t hide his disappointment, but of the Wray, McKinney, Friel, Quinn, Mahon and O’Donnell families, he said, “Their victory is our victory”. He and the other families added that “justice for one family is justice for all of us”.

He nonetheless acknowledged that the overriding feeling among the families was one of disappointment and deflation.

Some British politicians and soldiers’ representatives have complained of a “witch hunt” against the former British paratroopers with many saying that in Northern Ireland there was one law for the IRA and one for the British army.

The past still causes trauma for many of the Bloody Sunday families and for thousands more people who suffered in the conflict. But it is the issue which is not yet resolved

But claims of betrayal and witch hunt hardly stand up. As pointed out by Paul O’Connor of the Pat Finucane Centre in Derry, just four British soldiers have been convicted of murders relating to the Troubles and all ultimately received royal pardons and all were permitted to rejoin their regiments.

This compared, he said, with an estimated 20,000-30,000 former republican and loyalist paramilitaries who served time in prison for a range of offences including murder.

Jean Hegarty, whose 17-year-old brother Kevin McElhinney was killed on Bloody Sunday, sought the positive. The PPS’s decision “brings some fruition” for the families, she said.

And she could understand and accept most of the PPS’s explanation. But, she added, how could the evidential test for prosecution be met when investigators “did not collect any evidence on the day”?

“I mean that’s where it all goes back to, and it is a problem for all legacy issues,” she added.

Such is the sensitivity and toxicity of the past, and such is the range of conflicting views on how to move forward, that no politician has managed to grasp this poisonous thorn.

The Northern Secretary Karen Bradley, after a public consultation that drew thousands of responses, was due to publish fresh proposals earlier this year but that was put on hold due Brexit. In any case Ms Bradley’s credibility in this area has been badly damaged by her comments last week that all Troubles killings at the hands of British soldiers and police were “not crimes”. Her subsequent apology did little to correct matters.

Still, if there are any lessons from Bloody Sunday and if Northern Ireland ever is to face into the future relatively free from the chains of the past the legacy of the Troubles somehow must be faced squarely and bravely.