Flight of the Doves deserves to be a national institution

Donald Clarke: We need a campaign to put the film at the heart of Saint Patrick’s Day 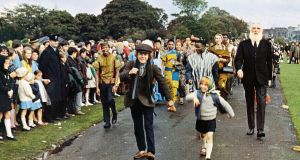 Flight of the Doves: unspools on TG4 at 11am on St Patrick’s Day

You can’t force a cult to happen. By definition such things evolve organically as enthusiasts group around some undervalued artefact.

But a campaign is needed to confirm Flight of the Doves’ position at the heart of the Saint Patrick’s Day experience. We’re nearly there.

A glance at the national broadcaster’s schedule for the great day confirms that Ralph Nelson’s film – a modest hit in 1971 – unspools on TG4 at 11am. It’s usually showing somewhere on March 17th. But we haven’t yet got to the stage where it’s an integral part of the experience.

There are snarky reasons to enjoy the picture. It also deserves unqualified acclaim for its professionalism, its originality and – more than anything – its startling inclusiveness. Trust no person who places it in the same bracket as Darby O’Gill and the Little People. Now, that really is Micksploitation.

Almost everyone has passed by the TV when Flight of the Doves was playing. Based on a novel by the once hugely popular Walter Macken, the picture follows Finn and Derval Dove, two Liverpool-Irish orphans, as they flee their evil Uncle “Hawk” Dove through a busy and picturesque version of Ireland. Some guff about an inheritance does serviceable MacGuffin duties.

Flight of the Doves arrived just three years after Oliver! won best picture at the Oscars and it offered that film’s two breakout stars another chance to rub antagonistically against one another. Jack Wild, Artful Dodger in the earlier film, sticks with the cockney as the feisty Finn. Ron Moody, the definitive Fagin, gets to work through a vast bestiary of voices as the genuinely unsettling Hawk.

Nelson was a sort of director we rarely see anymore – a man who drifted successfully from one mainstream genre to the next without taking a breath. He directed Sidney Poitier to an Oscar in The Lilies of the Field (1963) and Cliff Roberston to another in Charly (1968). Before making his adorable Irish family musical, he directed a western described, in its own publicity material, as “the most savage film in history”. Soldier Blue (1970) got mixed reviews, but its winding together of the My Lai atrocity with the massacre of Cheyenne and Arapaho in 19th century Colorado confirmed Nelson as a courageous film-maker.

He drafted all kinds of beloved Irish characters into Flight of the Doves. Brendan O’Reilly, later best known as a sports presenter on RTÉ, had a significant supporting role as a police officer. Tom Hickey and Niall Tóibín also stepped out for the Garda Síochána. More about Dana and Noel Purcell in a moment.

Even the film’s greatest defenders would admit that it has its cheesy moments. The great Dorothy McGuire is asked to ladle on a little too much sugar as the saintly “Granny” O’Flaherty. Some of the slapstick is a bit Crackerjack (Crackerjack!). But the romanticised variation of Ireland is flavoured with an ecumenical warmth rare in contemporaneous representations.

It teases out no nuances. But it is all the more effective for the unadorned simplicity of its message

The kids clatter the way to a synagogue just above Merchant’s Arch (whose exit is apparently miles away in a leafier suburb) and encounter a kindly Rabbi played by Noel Purcell. Let’s assume that Nelson, an educated man, who adapted the novel with Frank Gabrielson, had drawn from James Joyce’s Ulysses and its Jewish narrator for clues as to the Dublin experience.

Elsewhere they run into a kindly band of Travellers (the terminology actually used would not be acceptable today, but worse things were said about that community) and make friends with the charming young Sheila O’Ryan. It’s hard to overstate how famous Dana was at that time in Ireland and, just a year after winning the Eurovision Song Contest, she does good work with a ballad, partly in Irish, partly in English, based around the legend of Tír na nÓg. The sequence sentimentalises the Travelling community. We might now worry about cultural appropriation. But the intentions are commendable.

The film’s centrepiece remains, however, the grand musical number on Saint Patrick’s Day. Written by Roy Budd, best known for the insidious theme to Get Carter, You Don’t Have to be Irish to be Irish is an earworm of epic proportions. It looks as if every civic group in the capital has gathered to bellow out this hymn to the flexibility of Irish identity. There are legions of Guards. The Drimnagh Tenants Association is here. So is the Iveagh Trust. Choreographed with admirable discipline, they bellow: “You don’t have to be Irish to be Irish/ But you live a little more and you love a little more” as Finn and Derval wind through the marchers. Most notably, the crowd buzzes with African, East Asian and other racial groups not then commonly associated with the Saint Patrick’s Day experience.

In a recent essay for the New Beverly Cinema in Los Angeles, Marc Edward Heuck notes that the number looked to be giving two fingers to Enoch Powell and his notorious “Rivers of Blood” speech from a few years earlier. The tune seems more relevant than ever in an era when racist fatheads on both sides of the Atlantic boast about being “ethnically Irish” on their flatulent social media accounts. The song is not subtle. It teases out no nuances. But it is all the more effective for the unadorned simplicity of its message.

We were once a little ashamed of Flight of the Doves. We were once uncertain about the whimsy of John Ford’s The Quiet Man. Nelson’s film is not on a par with that paean to a Celtic nowhere, but it is no more divorced from reality. It has great songs. It has a super baddy. It’s got Tom Hickey in a Garda’s hat. Flight of the Doves deserves to be a national institution.

The misunderstood, useless and brilliant artists of the Irish diaspora
10