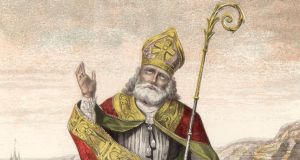 St Patrick: a flesh-and-blood man about whom we know next to nothing.

In the epilogue to Saint Patrick Retold, his absorbing investigation into the lives and afterlives of Ireland’s patron saint, Roy Flechner reports on a clash between St Patrick and his English opposite number St George. It takes place around the time of the Act of Union: tensions are high, and the two saints face off in unearthly fashion – literally so, for their clash is on the surface of Mars, where Patrick has just threatened to cut off George’s nose, to pay the English back for robbing Ireland of its independence and its future. The account was published in a contemporary polemical Catholic text: and now, in what Flechner calls “an extraordinary piece of satirical hagiographical science fiction”, we find Patrick renewing his threat:

St George reply’d, ‘Yes, be it understood, The measure’s intended alone for your good’, ‘Be it so, cried Patrick, ‘look sharp to your nose, Since you are determin’d on coming to blows’.

This bizarre example of space-age reportage exemplifies the strangeness which envelopes St Patrick: this powerful brand, this ubiquitous symbol which has been pressed into the service of manifold campaigns for centuries, this national cornerstone, this generator of bountiful revenue – this flesh-and-blood man about whom we know next to nothing. For the ultimate issue with St Patrick is simply this: there is an extraordinary dearth of hard facts, and any discussion of this historical figure is no easy task.

Even the testimony of Patrick’s own Confessio does not offer much by way of detail – and it is to Flechner’s credit that he does not seek to evade this essential difficulty. Instead, he addresses this very issue in the book’s opening pages, before turning it admirably to his advantage. The deep historical shadows pooling around Patrick become in themselves a focus of interest: and, by taking each point of doubt and confusion, and broadening its context generously, he turns what might have been a maddening exercise in guesswork into a fascinating and enlightening exploration of early Christian Ireland, Britain and Europe.

We do know, of course, that Patrick was certainly not Irish. It is very likely that he came from the northern marches of post-Roman Britain: here, the trail runs cold – but Fleshner creates a compelling portrait of a society under immense strain, with the Roman legions gone, and the fabric of life fraying. It has frequently been claimed that Patrick was taken by Irish slavers, but Flechner speculates that he in fact went willingly to Ireland as a proto-modern economic migrant, in order to evade the (frequently tedious and usually expensive) responsibilities that went along with being a decurion, or glorified tax collector, in his local town.

This idea is certainly less arresting than the standard image of the youthful Patrick as a wretched prisoner torn away from his home: but it does offer a fascinating suggestion of a tough operator, who scoped out Ireland, learned its culture and politics as he learned his religion – and ultimately deployed this knowledge to synthesise a religious practice adapted perfectly to a specifically Irish context.

Flechner is similarly crisp in his analysis of the Ireland in which Patrick was ministering so cannily. He draws our attention to the undoubted existence of an Irish Christian community before Patrick set to work; and in particular he studies the ministry of the shadowy Palladius, a “first Patrick” despatched from Rome, whose works in Ireland have been essentially forgotten for political reasons. Palladius was active in the southeast: but the eventually primacy of Armagh in the Irish Church made it imperative to champion the ministry of Patrick (associated with that city) over that of his predecessor, whose works have sunk into relative obscurity. The cult of Patrick, in other words, is a creation of turf wars and church politics; we might just as easily have had a St Palladius’s Day to celebrate, had the eddies of history swirled in other directions.

This book is at its most vivid, maybe, as it traces the utility of the saint in more recent times: for example, in 1915, with the war effort still relatively popular, March 17th saw full military parades in a balmy springtime Dublin; but, by 1916, The Irish Times was reporting disapprovingly that “some thousands of able-bodied Irishmen, who refuse to help their country in the present war, paraded the streets of Dublin and Cork”, flaunting their Patrician nationalism for all it was worth. Patrick has lent himself to any number of causes – and one senses that his day is far from done.

Music Quiz: Can you solve this Beatles Mathical Mystery?
3