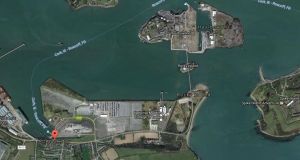 An Bord Pleanála’s deferral of the decision on a €160 million incinerator at Ringaskiddy (bottom left) was to allow Indaver to provide more information on the impact it would have on helicopters entering and leaving Haulbowline Naval Base (top right). File photograph: Google Maps

The deferral of a decision on an incinerator in Cork Harbour was to allow waste management company Indaver to address concerns over helicopter flights nearby, The Irish Times has learned.

An Bord Pleanála’s deferral of the decision on the €160 million facility was to allow Indaver to provide more information on the impact it would have on helicopters entering and leaving Haulbowline Naval Base.

An Bord Pleanála was due to give a decision on the 240,000-tonne capacity municipal and hazardous waste incinerator at Ringaskiddy on Wednesday, but a decision was taken earlier this month to defer a decision for the fourth time and seek more information from Indaver.

The planning authority wrote to Indaver on Monday, pointing out “the issue of helicopter navigation safety at Haulbowline Naval Base has been brought to the attention of An Bord Pleanála in submissions by the Dept of Defence to the oral hearing” on the project held last April and May.

It has invited Indaver to respond to concerns on how emissions from the incinerator chimney stack might impact on local climatic conditions and helicopters landing and taking off from Haulbowline, and whether there might be a need for an exclusion zone around the naval base.

During the oral hearing, Cmdt David Browne of the Irish Air Corps said construction of the incinerator so close to Haulbowline would “create a flight safety hazard to Air Corps helicopter operations” and impact on its ability to operate helicopters into Haulbowline.

Cmdt Browne also criticised the use of Civil Aviation Authority (CAA) standards by British-based consultants hired by Indaver when assessing the impact of the development, pointing out that the Irish Air Corps, like the RAF in the UK, operate to military aviation standards and not CAA ones.

Counsel for Indaver, Rory Mulcahy SC, said in his closing statement at the hearing that Indaver had sought to address Air Corps concerns and environmental consultant Dr Edward Porter had testified the plume from the stack does not pose a risk to any helicopter more than 50 metres from it.

He pointed out that an aviation consultant, retired Cmdr Shane Savage (Royal Navy), had testified he could see no difficulty for the Air Corps in avoiding the small zone of influence of the exhaust plume, irrespective of the weather conditions in the area.

The Irish Times understands An Bord Pleanála’s decision to seek more information from Indaver on the impact of the incinerator on helicopter traffic was taken earlier this month, several days prior to the Rescue 116 tragedy off the Co Mayo coast on March 14th.

Meanwhile, Indaver said it would respond to the An Bord Pleanála request for additional information on the impact on helicopter operations by the May 15th deadline set by the board and it looked forward to the board’s decision in due course after that date.

Linda Fitzpatrick of Cork Harbour Alliance for a Safe Environment (CHASE), said if An Bord Pleanála needs additional information on the impact on helicopter movements, it should ask the Department of Defence, as Indaver had “neither the authority nor the expertise to answer its queries”.