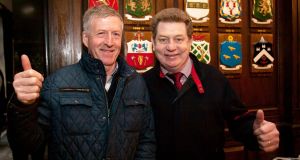 Former Clerys staff Joe Tobin from Lucan and Sean Clifford from Ranelag at the Mansion House where the deal was announced. Photograph: Collins 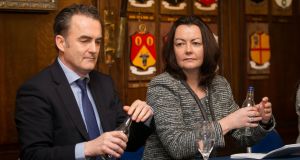 Architect Rory Murphy (left) and Natrium director Deirdre Foley during the announcement at the Mansion house in Dublin. Photograph: Collins

Former Clerys workers, sacked from their jobs at the landmark Dublin department store almost two years ago, have reached an undisclosed financial settlement with the building’s owners Natrium.

Siptu services division organiser Ethel Buckley said the terms of the deal, which includes an agreement on future local employment in the new store, would remain confidential, but that a “good will payment” which was “substantial” in nature would be made to the 130 former employees.

Speaking in the Mansion House, Dublin, after her first meeting with the former workers and with union representatives, Natrium director Deirdre Foley said she was “delighted to end” what had been “a long running dispute, in the best interests of everyone involved”.

She said she looked forward to developing a working relationship with the community in the north-east inner city and to “look at employment creation opportunities”.

Construction of the new store would start in the coming months and take up to three years to complete, Ms Foley said.

The deal, which was brokered by Lord Mayor of Dublin Brendan Carr, came after Siptu on Monday withdrew its planning appeal against plans for the €150 million redevelopment of Clerys.

The union had been the only appellant to An Bord Pleanála against Dublin City Council’s decision last December to grant permission to OCS Properties, to redevelop the department store as a hotel, offices, shops and restaurants.

Clerys closed in June 2015 with the loss of more than 460 jobs, when Natrium, backed by FAM Assets and UK-based Cheyne Capital, bought OCS Properties, which owned the building and OCS Operations, which ran the department store, for €29 million.

It sold the operating company to an insolvency specialist which successfully petitioned the High Court to have it liquidated.

As a result, 130 Clerys employees and about 330 people working for concession holders, lost their jobs. These workers were not employed by Clerys/OCS but worked for companies that had branches in the shop. OCS said at the time that a number of concession staff were redeployed.

Following a half-day of hearings at An Board Pleanála’s head offices on Marlborough Street in Dublin on Monday, the union asked for short adjournment. It returned in the afternoon and said it was withdrawing its appeal.

Shortly before the hearing was halted, Lord Mayor of Dublin Brendan Carr issued a statement to say he would be making “a major announcement in relation to the Clerys development on O’Connell Street” on Tuesday.

Speaking at the Mansion House on Tuesday morning Mr Carr said the agreement reached was a “just resolution which takes into account the interests of the former Clerys workers” and “those of future Clerys workers”.

However, he said: “legislative measures must be introduced to ensure that a dispute of the nature of the one that surrounded the closure of Clerys cannot happen again”.

In addition to the financial settlement, former workers will be offered training to seek reemployment in the new store and “due recognition” would be given to their former service, Ms Buckley said.

There will also be training and employment opportunities for communities in the north-east inner city. An “understanding” had also been reached on fair working conditions for both the construction and operational stages of the development, she said.

Crude oil prices have plummeted. Why not prices at the pump?