School stress: how teachers are helping children cope with anxiety 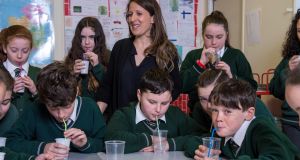 Spelling tests and messy handwriting are no longer the only key talking points at primary school parent-teacher meetings. Increasingly, a new issue of concern is emerging: anxious schoolchildren.

Gaelscoil an Ghoirt Álainn, in the Mayfield area of Cork City, is typical of many schools where more pupils are struggling to deal with stress or worry.

“This year, in particular, we noticed a much higher rate of parents coming in concerned about their children’s anxiety,” says Aisling Kelliher, a resource teacher at the school.

A recent survey by the Irish Primary Principals Network (IPPN) highlighted just how widespread the issue is for many principals. More than a quarter of its members reported a spike in anxiety levels in their schools.

The symptoms and behaviours associated with anxiety can vary from separation anxiety, extreme self-consciousness and intense worry. If left untreated, it can lead to depression and other psychological disorders.

It is by far the most common psychological disorder in school-aged children. A report carried out by Barnardos in 2008 indicated that almost one in five children suffer from a mental health issue such as anxiety.

Another such report published by the Royal College of Surgeons found 14 per cent of 11- to 13-year-old children in Ireland had experienced an anxiety disorder.

Teachers are often quicker to spot issues among children when their behaviour is out of keeping with other pupils in the classroom.

“We can see anxiety surfacing in a junior infant – sometimes they can’t even manage to get into the class,” says Kelliher.

“In the senior end of the school, we might have problems with panic attacks. It definitely hampers their learning, they just can’t settle in.”

She feels social media and children’s access to smartphones is impacting on anxiety levels. It’s a view shared by IPPN president Maria Doyle.

Disputes that start on social media can be carried on into school the following day and often involve bullying in the form of deliberate exclusion.

“From a very young age children have access to social media, and that has become such a big player,” says Doyle.

While the school has a role to play in educating children in relation to the safe use of social media, Doyle feels quite strongly that the buck stops with the parents in terms of policing their activity.

The recession and mental health

But social media is by no means the only potential cause of a spike in childhood anxiety. Research indicates the effects of recession have contributed to a sharp increase in mental health problems among children.

An analysis of the Growing Up in Ireland study, which has tracked the lives of almost 20,000 children over the past decade or so, found stress linked to falling incomes and unemployment damaged many parents’ and children’s mental health.

Parents under stress were found to use harsher parenting styles with less warmth, the study found. Worsened relationships between parents and children were linked to higher anxiety, conduct problems and lower child happiness.

Prof Richard Layte of Trinity College Dublin, one of the study’s authors, says the findings have long-term implications for young people. “Anxious, unhappy children do worse in school, often with long-term consequences for both wealth and health.”

Even though the country is recovering economically, many families are still struggling.

“For families that were deeply affected by [the recession], it’s not over and it won’t be over for a very long time,” says Ryan. “The impact of that on children of all ages has been significant.”

As with many other school-based problem-solving initiatives, early intervention is paramount when it comes to dealing with anxiety.

In many cases it must start with the parent or caregiver. At Gaelscoil an Ghoirt Álainn, they have been advised by the National Educational Psychological Service (NEPS) to try to treat the parent before addressing the child’s issues.

This approach has been particularly successful in combatting separation anxiety, with meetings arranged involving the teacher, psychologist and parents or caregiver.

“The psychologists will give them tips there and then,” says Kelliher “and a lot of the time the problem disappears after a couple of weeks.”

Parents, however, need to be receptive and open to listening to others who may be giving them the information, be it the class teacher, the principal or a psychologist.

“It’s hard to take and it is a difficult conversation. But every parent should be aware that it could be their child,” says Doyle.

Mental health issues can be complex – so are teachers or principals really equipped to deal with the problem?

In January 2016, almost 80 per cent of primary school principals said they felt “insufficiently trained” or “not trained at all” when it came to dealing with mental health issues.

Doyle points out that you don’t have to be a trained psychologist to deal with matters that arise in the school. “Often a child just needs to be listened to, and we can all listen,” she says .

The Government has faced criticism over spending cuts to psychology and other crucial services in recent years. However, it says it is rebuilding supports, with plans to increase resources for psychologists this year, and is extending school-based programmes such as the “Friends for life” programme, an evidence-based anxiety prevention programme.

But the problem of anxiety is not confined to children attending schools in more deprived areas.

“This is across the board – there are no social barriers,” says Doyle.

She says promoting the wellbeing of students needs to be at the heart of school culture.

This means providing support to schools and ensuring students in teacher-training colleges get the right training.

The most valuable thing Doyle feels schools can do, however, is “allow children’s voices to be heard in a safe space”.

Hundreds of teachers at primary and secondary schools are due to receive training as part of the expansion of an anxiety prevention programme.

Friends for Life is a 10-week programme that uses techniques such as cognitive behaviour therapy (CBT) to help children cope with stress. But what do teachers make of it?

“The children really enjoyed the section on relaxation through breathing, most notably the ‘milkshake breathing’ activity, done with a straw and water modelling abdominal breathing which calms their breathing and reduces anxiety,” says Lyons.

“However, I got the impression from some of the children that a few of the activities were a little too childish for their age.”

Aisling Kelliher, of Gaelscoil an Ghoirt Álainn, also felt some of the activities were unsuitable, and “there was a need for us to modify the incentives to suit the students in our school”.

There was some preliminary work to be done prior to starting such as helping children identify feelings.

“Some kids with autism spectrum disorder didn’t know what anxiety was and they didn’t know that they feel anxiety,” says Kelliher.

“They’d heard the word, they’d seen the definition but they couldn’t relate to the emotion of it.”

Trying to reiterate for the students that there is no such thing as a bad feeling took a long time, she says.

“But it’s amazing how quiet they are when it comes to Friends for Life. Even the most confident are a bit tentative and cautious because it’s to do with emotions.”

Tips to help your child with anxiety

* Listen to your child’s fears – no matter how trivial they may seem.

* Be aware of your own fears and anxieties: talk to another adult rather than discussing them with your child.

* Try not to over-reassure your child – focus on building confidence.

* Do things they enjoy: encourage your child to take part in activities they gain a sense of achievement from.

* Practise relaxing sighs: this encourages the body to relax.

* Visualisation: encourage your child to imagine a place they feel happy and safe.

* Encourage the acceptance of all feelings, bad and good.