Martin McGuinness: Behind the mask

An obituary of the St Lucian poet, Derek Walcott, who died this week, opened with Walcott’s response to an exam question: “What is the difference between a ruler and a king?”

The young man wrote: “A ruler is a foot long, but a king will go to any lengths.”

That is how Martin McGuinness will be remembered: the fearless man who was prepared to go to any lengths on the long march from guns to government.

McGuinness first gained international notoriety in the early 1970s, with a stream of celebrity callers to his Bogside home and his safe house in the Illies in Co Donegal.

The author Edna O’Brien, the actress Siobhan McKenna and Jill and Leon Uris were among them. Jane Fonda and her husband, Tom Hayden, appeared in his kitchen one day in 1976 while Hayden researched a book about Irish republicanism.

While Jill Uris photographed him for a collection of photographs, A Terrible Beauty, Leon questioned him closely about his thinking. Later, Uris based Conor Larkin, the IRA hero in his book, Trinity, on McGuinness.

One journalist described him as “fair-haired, handsome and with almost a schoolboy shyness about him”. Headlines proclaimed “The boy who rules Free Derry”, Derry’s “blue-eyed boy”.

In November 2003, he insisted at the Bloody Sunday Inquiry, when 13 unarmed men were shot dead by the Parachute Regiment during a peaceful civil right march, that he had been unarmed on the day.

The events of that day marked not only the city of Derry and Ireland, but also McGuinness.

Later that year, he showed for the first time the sure touch and the ease he had developed when dealing with the media.

In a television interview, shortly after Bloody Sunday, as he strolled through the Bogside, he had answered a question about IRA policy addressed to him as “Officer commanding the Provisional IRA operation” without turning a hair.

Seán MacStíofáin and Seamus “Thumper” Twomey quickly spotted his talent as a future leader. His calmness under pressure and his affable manner rarely deserted him.

However, it did fall away in 2002 when US journalist Neil Conan played back to McGuinness a tape of a previously forgotten conversation between the two 40 years before.

Back then, Derry faced a car bomb campaign under McGuinness as OC Derry Brigade of the IRA.

As Eamonn McCann put it, the IRA “had managed to bomb the city centre until it looked as if it had been hit from the air”.

After questioning McGuinness in 2002 when the IRA had issued an unprecedented apology to “non-combatants” who had been killed by the IRA, Conan asked: “Inevitably some civilians are going to be hurt in these explosions?”

McGuinness “That’s quite right, you know. But we have always given ample warning, and anybody that was hurt was hurt through their own fault; being too nosy, sticking around the place where the bomb was after they were told to get clear. It’s only been their own fault that they’ve been hurt.”

The mask had slipped, revealing the casual, callous disregard for human life that characterised the IRA’s campaign. 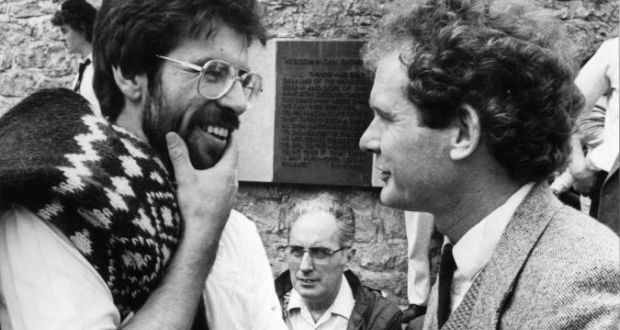 Shortly after Bloody Sunday, McGuinness made international headlines when he became the youngest member of an IRA delegation to meet William Whitelaw in Cheyne Walk in London.

Frank Steele, an agent with the Secret Intelligence Service (SIS, better-known as MI6) saw a man the British state could do business with, and soon a dialogue had begun between them. Following two short periods in jail in the Republic, McGuinness rose through the IRA’s ranks.

By 1978, after Gerry Adams was stood down as IRA chief of staff when he was arrested after the La Mon massacre, McGuinness took over.

He was ambitious. He had already travelled to the US three times.

In January 1978, as McGuinness looked on, two masked volunteers held an M60 rifle aloft at the seventh anniversary of Bloody Sunday, as a watching crowd cheered.

By 1978 McGuinness as chief of staff was determined to establish a “liberated zone” along the Border and gave the go-ahead for a “dummy run” for an operation that would strike at the very heart of the British establishment.

Since 1969, Earl Mountbatten and his family had spent every August in Sligo. He had been warned that he was a prime IRA target.

On the morning of August 27th, 1979, two Irish plainclothes detectives watched through binoculars as Mountbatten’s boat, the Shadow, silently sailed past them. Suddenly the silence was shattered by a massive explosion.

The dead included Lord Mountbatten, his nephew Nicholas Knatchbull, Paul Maxwell, a 15-year-old schoolboy from Enniskillen in the North of Ireland who was helping as boatman, and the Dowager Lady Brabourne.

That afternoon Parachute Regiment trucks drove to an army base at Newry. Their route took them past Narrow Water, on the shore of Carlingford Lough, marking the boundary between NI and the Republic.

As the rear vehicle passed by a trailer, an IRA team detonated an 800lb bomb.

Simultaneously an IRA unit on the southern side of the Border opened fire. A civilian, Michael Hudson, was killed in the crossfire. Six soldiers were killed.

Several more Land Rovers and two helicopters arrived. As a Wessex helicopter took off to ferry injured soldiers to hospital, a second 800lb bomb was detonated, killing 12 more soldiers. It was the Paras’ biggest loss since Arnhem.

The significance of the IRA’s coup was soon scrawled all over gable walls in Belfast and the Bogside: “Thirteen dead and not forgotten, we got eighteen and Mountbatten.”

It was an echo of the graffiti that appeared after Bloody Sunday when British soldiers had boasted, “We got one, we got two, we got thirteen more than you.” It was payback.

In his journal that night, Prince Charles, colonel in chief of the Parachute Regiment and Mountbatten’s nephew, wrote “Life will never be the same now that he is gone. I fear it will take me a very long time to forgive these people . . .”

Yet by 2015, Prince Charles and Lady Camilla Parker-Bowles had visited. In the interest of our peace, Prince Charles said, we must no longer be prisoners of our history.

His words were generous, and symbolised growing reconciliation. Less than a year ago, McGuinness met Queen Elizabeth at Hillsborough.

McGuinness is seen walking smiling, towards her, hand outstretched. As they shake hands, McGuinness asks her how she is. She replied, drily, “I’m still alive, anyway.”

Some have accused him of speaking out of both sides of his mouth.

In 2002 he said, “the IRA have done things in the past which were wrong” that he had condemned, “but I haven’t done anything that I’m ashamed of”.

The families of some victims may dispute that, including the family of Patsy Gillespie, for instance, the first IRA “human bomb” victim forced to drive a van load of explosives to a British army checkpoint on the Border where an IRA unit, watching from the safety of Donegal, detonated it.

Or the family of Frank Hegarty, the IRA quartermaster who McGuinness suspected of giving information to British intelligence in 1984.

McGuinness met his widowed mother, Rose Hegarty, where he promised her, “on bended knee, that her son was safe to return from exile . . . A few boys would question him and he’d be free to go.”

Hegarty was later shot and his body unceremoniously dumped, his eyes bound back into his head by gaffer tape after they had been blown out by the close velocity shots that killed him.

In Julius Caesar, Shakespeare has Mark Anthony, alone and grieving while he imagines Caesar’s ghost speculating on revenge and letting “slip the dogs of war”. In his time, McGuinness was not reluctant to do so.

Kathryn Johnston is the co-author with Liam Clarke of Martin McGuinness: From Guns to Government

2:22 Fintan O'Toole: A real republic should not have charity delivering public welfare

2:38 6:09 Rapid rise in coronavirus Delta variant in Ireland over past week to be discussed at Cabinet

Kalman filters have applications from moon to motorway 10:42
Amazon apologises for error affecting Irish customers 09:51
Man to appear in court charged over Firhouse death 08:18
EPA calls for ‘immediate increase’ in pace of emissions reductions 06:35
Rapid rise in coronavirus Delta variant in Ireland over past week to be discussed at Cabinet 06:30

3 Man taunted after being assaulted by ‘well-known’ GAA players