Inside the world’s largest camp for Syrian refugees 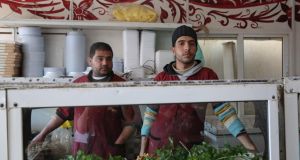 Mohammad and a colleague in the falafel restaurant where they work in Zaatari refugee camp. Photograph: Sally Hayden 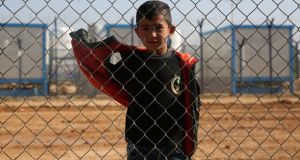 A boy stands behind a fence at Zaatari camp in Jordan, currently home to 80,000 Syrian refugees. Photograph: Sally Hayden 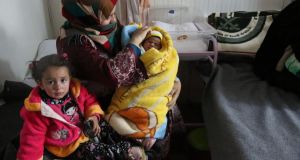 A woman sits with her child and newborn baby in the UN field hospital in Zaatari refugee camp, Jordan. About 170 babies are delivered there each month. Photograph: Sally Hayden 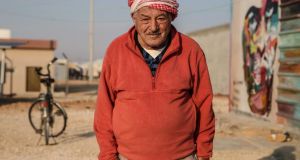 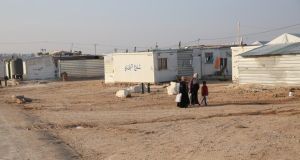 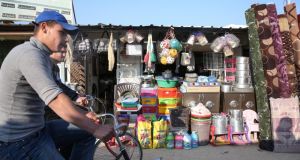 Every day when Ali Jibraail wakes up he worries about his falafel shop. Will this be the day the electricity generator fails? Can he continue to ward off an increasing number of competitors? Might his suppliers begin to resent crossing the desert to make deliveries and raise their prices?

This is Zaatari refugee camp in Jordan, home to 80,000 Syrians who have fled the devastating war, and – established four years ago – Jibraail’s is its longest serving restaurant.

The restaurant is located on Zaatari’s main shopping street – where residents can procure everything from bicycles to wedding dresses to canaries. UN workers cheerfully title it the “Champs Élysées”. “But only the foreigners call it that,” says Ala (25) from Daraa in southwest Syria. “We call it Hamidiyah market – [after] the largest market in [the Syrian capital] Damascus.”

This month the Syrian war enters its seventh year. With no end in sight, life for the displaced trundles on through births, deaths and marriages – milestones muted by the feeling of transience. A sizeable portion of Zaatari’s residents have more significant memories inside the camp than out.

Cradling her newborn son in a ward of the on-site field hospital, 16-year-old Amal Hamoud hasn’t been to school since she left Syria and was forced to abandon 5th grade. “My son looks like his father,” she says.

About 170 babies are born in the camp each month – 10 per cent to girls younger than 18. Excited by the prospect of a celebration and intrigued by kind manners and good looks, Hamoud accepted an offer of marriage from a 20-year-old labourer last year. “Inshallah [God willing].”

More than four million refugees have fled the violence in Syria, ending up scattered across continents – a mixture of chance and resources deciding their fates. Syrians have ended up everywhere from Canada to Niger to Somalia. However, despite the focus on those crossing the Mediterranean to Europe – evidence suggests the vast majority just want to go home.

“I would say that Syrians are not really the profile of refugees willing to migrate far away from their own countries,” says Matteo Paoltroni, technical advisor for the European Commission’s humanitarian aid department. Paoltroni knows of many cases where refugees refused to be resettled away from Jordan because they didn’t want to move too far from Syria.

“They still dream about going back . . . The traditions, the culture, the language, the country is different,” he says.

The border between Jordan and Syria has been closed since a suicide bombing attack last June in which seven Jordanian guards were killed. Now some 46,000 Syrians remain stranded there, still hoping to get across.

Yet every day about 60 Syrians leave Jordan to go in the other direction, according to charities and lawyers, who say there is still a lack of proper research as to why.

“What are the reasons, are there families returning? Or are they finding a way to leave as individuals, not families?” asks Samar Muhareb, director and founder of civil society organisation Arab Renaissance for Democracy and Development (ARDD) Legal Aid.

The answer to that question is a simple one for some of the refugees contemplating a return to Syria: They miss their families or friends and are willing to risk their lives to see them again.

However, others seemed to be seeking a past that may not exist anymore. Noura (31) witnessed her sister being shot by a sniper while she was cleaning carpets on the roof of their home in Homs; she cries when she recalls this. Shortly after her sister’s death, Noura’s husband developed psychological problems.

“I think he has schizophrenia,” she says. “First he was for the revolution, then he was against it. He started beating me but when he started beating the children I couldn’t take it anymore.”

Despite escaping to Jordan, Noura hasn’t found happiness. “When we walk in the streets we feel like we are refugees. Some people look down on us and we can’t express who we are.”

Regulations in the camp are strict, and refugees can be deported back to Syria for failing to get proper documentation or for leaving the camp without authorisation; to do so requires both connections and money.

Jordan – home to more than 630,000 registered refugees and 1.4 million Syrians – has begun offering work permits after prodding by donor countries. Last year the Amman government pledged to provide as many as 200,000 such permits, provided there was an increase in business investment. One of the first large companies to offer jobs there was the Swedish furniture giant Ikea, which said in January it would begin hiring Syrian refugees to produce rugs for export around the Middle East.

Despite this, progress is slow. So far about 36,000 work permits have been issued, only 2 per cent of them to women, according to the European Commission.

Inside Zaatari camp, documentation isn’t such an issue. A look of steely concentration on his face, former clothes seller Mohammad labours from early in the morning until 9pm mashing chickpeas and carefully measuring spices to create the perfect falafel.

Mohammad regards himself as lucky. “It’s fine, we’re living,” he says of Zaatari, in between serving customers. “I would prefer if my daughter was raised in Syria but we’re here now, it’s safe and she’s like all the other Syrian girls here.”

Still, he’s planning for the future – the journey home and the chance to open his own falafel shop, where the community can gather to chat and gossip. “I’ll be the boss,” he jokes. “But for now, we have to survive.”