Government to invest €178m in Gaeltacht and Irish language

Joe McHugh: he said the funding would “creating opportunities for more people in all parts of the country to engage with the Irish language”. Photograph: Alan Betson

The Government said it would spend €33 million upgrading a number of Irish-language summer colleges, providing “strategically-located” language support and childcare facilities, and building new offices and facilities in the Aran Islands.

This money would “support and strengthen” the use of Irish as “the principal community language in the Gaeltacht, and increase opportunities” for its use outside of its traditional borders.

Mr McHugh said that through the funding from the new policy Investing in Our Culture, Language and Heritage 2018-2027, “we will be prioritising investments that will help sustain these communities, as well as creating opportunities for more people in all parts of the country to engage with the Irish language”.

Some €105 million will be given to the development agency Údarás na Gaeltachta to create “in the region of 1,000 jobs annually to maintain the social and economic fabric” of Gaeltacht communities in Donegal, Mayo, Galway, Cork, Kerry, Waterford and Meath. This money will also allow Údarás na Gaeltachta to invest in its property and infrastructure portfolio with the hope of attracting and developing new businesses. 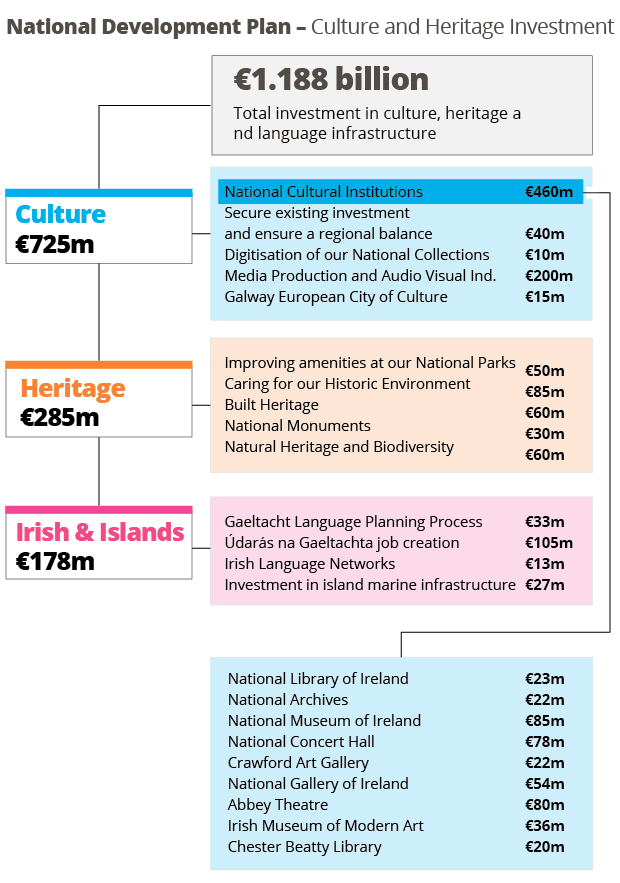 Some €13 million will be designated to support Irish-language networks and Gaeltacht service towns, that is towns which provide support to established Gaeltacht communities.

Irish-language and cultural centres will be developed throughout the State, and around €4 million will be set aside to provide a “flagship” cultural centre in Dublin to support the city’s Irish speakers.

The future of Irish-speaking islands has been of concern to local communities and language groups for a long time. To that end the Government said it would invest €27 million to upgrade marine infrastructure to those islands. The piers on the Aran Islands of Inis Oírr and Inis Meáin would be upgraded, while the pier in Machaire Rabhartaigh, Co Donegal, which serves Oileán Thoraí (Tory Island), would also be improved.

Irish-language groups have given the plan a qualified welcome.

Antoine Ó Coileáin, chief executive of Gael Linn, a group that organises Irish-language courses and events for young people, said the “breadth and scope of the document is impressive, as is the overall level of funding being proposed”.

“Regarding Irish, spending on centres used by coláistí samhraidh [summer colleges] is to be welcomed, as is the commitment to fund an Irish-language and cultural hub in Dublin. Those two measures alone have the potential to energise a whole new generation of Irish speakers.”

However, he noted “the projects identified...focus almost entirely on capital spending and, therefore, comprise only one of the elements necessary for comprehensive language planning. Bricks and mortar alone will not win the day.

“We await detailed language measures from the Department of Culture, Heritage and Gaeltacht to deliver on the targets outlined in the 20-Year Strategy for Irish.”

The president of Conradh na Gaeilge, Niall Comer, said it was a hopeful sign that the Government was showing support for the development and maintenance of the language, especially in Gaeltacht regions, and the plan to develop Irish-language centres was also welcome. However, it also wanted clarification on the time-lines for the proposals.

Holohan warns against use of antigen tests as ‘green light’ for risky activities 12:39
Vladimir Putin arrives in Geneva for summit with Joe Biden 12:17
Remains found off Cork coast confirmed to be those of Barry Coughlan 12:03
Judge overturns inquest verdict on death of Nóra Quoirin 11:54
HSE may be impacted for six months by cyber attack, says Reid 11:29