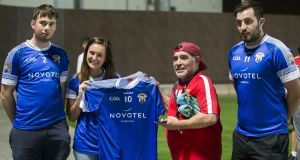 One of the world’s newest GAA clubs has found itself a celebrity fan - Diego Maradona.

By coincidence the players from Éire Óg in the United Arab Emirate of Fujairah found themselves training next door to local soccer club Fujairah FC, which is managed by the former Argentine World Cup winner who is commonly regarded as one of the greatest footballers of all time.

Éire Óg was founded eight months ago and emerged after an influx of 40 teachers from Ireland arrived to the eastern-most Emirate on one year contracts. They play other Gaelic football teams based in the UAE.

The teachers have been put up in a hotel next door to where Maradona is staying.

Club member Eamann James, who is a journalist in Fujairah, secured an interview with Maradona for a local magazine and told him about the new GAA club.

Fujairah FC then extended an invitation to Éire Óg club members to a training session to meet Maradona.

Just like Argentina’s, Éire Óg’s colours are blue and white and the club presented Maradona with a No 10 jersey, the number he wore during his playing career.

There was also some gentle jibing with Maradona about the fact that Gaelic footballers handle the ball. Maradona infamously branded the first goal he scored against England in the 1986 World Cup as the “hand of God”.

“He didn’t know about Gaelic football, but he knew about the Irish in Fujairah,” said team captain Andrew Hogan, who is from Co Clare.

The meeting took place on Thursday at Fujairah FC’s training ground. It was a conspicuous week for Maradona, who had just received news that he had become a grandfather again. His grandson Diego Matias Maradona was born in Naples.

“He was very gracious. He signed a lot of autographs and posed for a lot of photographs. People know when he is in town,” said Andrew. “He is a very warm character with a lot of personality.”

Coronavirus: 326 more cases but no further deaths reported in the State 18:25
High rent costs driving rise in number of homeless single adults 17:47
Irish haulier to be sentenced in UK for drug smuggling, money laundering 17:42
Ruling due on examinership for south Dublin care facility 17:36
An Post confirms restart of full postal service to US, Australia, New Zealand 17:13