Construction at Dun Laoghaire baths due to begin in coming weeks 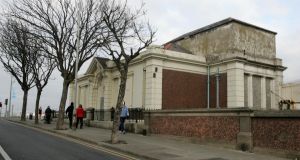 The development of Dun Laoghaire Baths will take nearly two years to complete and will include a small café, public toilets, an artist studio space, new lifeguard facilities, an up-grade to the existing maritime gardens and a new jetty. File photograph: Cyril Byrne

The redevelopment of Dún Laoghaire’s old Victorian baths is set to begin in the coming weeks with the new public area due to open in the spring of 2020.

A €9 million contract for the development of the site was signed on Tuesday between Dún Laoghaire Rathdown County Council and the SIAC and Mantovani construction group. The project is expected to cost around €10 million in total and has been part-funded by the European Regional Development Fund.

The development will take nearly two years to complete and will include a small café, public toilets, an artist studio space, new lifeguard facilities, an up-grade to the existing maritime gardens and a new jetty to provide access to the sea for swimmers, kayaks and canoes.

Approval for a €2.5 million project was granted by the Department of the Environment in March 2015. However, construction was delayed when exploratory engineering works found part of the site formed a retaining wall for the Queen’s Road which runs along the coast.

This led to a significant increase in the cost of the project and, in March 2018, the council agreed to fund the renovation as part of an overall €10.3 million investment under the State’s three-year capital programme.

Dún Laoghaire Rathdown cathaoirleach councillor Tom Murphy said the development of the baths would represent “a significant long-term investment in this public facility for residents and visitors to our county”.

A statement from Dún Laoghaire County Council said it hoped to see the project “transform the seafront landscape” and “reinvent the area as a destination for sea swimmers and sea sports enthusiasts from far and wide”.

Local Fianna Fáil councillor Cormac Devlin also welcomed the upgrading of the baths, which have been lying idle since the closure of the Rainbow Rapids in 1997.

“In the interim several plans have come and gone,” said Cllr Devlin. “They proved unacceptable due to their high-rise nature and unsuitability to the site. This proposal is in keeping with the low-rise built environment surrounding the site and ensures that the site remains in public ownership.”

The Dun Laoghaire baths were first constructed in 1843 and subsequently redeveloped by the then Kingstown town council in 1910.