Callinan told FG TD that McCabe was not to be trusted, tribunal hears 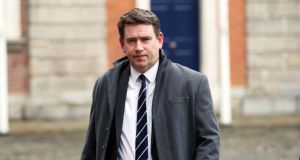 Fine Gael TD John Deasy told the Charleton tribunal Martin Callinan was the senior garda he had talked about during an RTÉ Prime Time appearance as having made derogatory comments to him about Sgt Maurice McCabe. Photograph: Stephen Collins/Collins Photos

Former Garda commissioner Martin Callinan told a Fine Gael TD that Garda whistleblower Sgt Maurice McCabe was not to be believed or trusted, the Charleton tribunal has heard.

The tribunal is looking at allegations that senior gardaí were smearing Sgt McCabe’s reputation to politicians, journalists and others.

Fine Gael TD John Deasy told the tribunal that Mr Callinan was the senior garda he had talked about during an RTÉ Prime Time appearance as having made derogatory comments to him about Sgt McCabe.

Mr Deasy said Mr Callinan had made those comments before the then commissioner’s appearance at the Public Accounts Committee in January 2014.

“The only person I remember being in proximity would be former commissioner Nóirín O’Sullivan,” Mr Deasy said.

He said it was a loud room and Mr Callinan had his back turned to Ms O’Sullivan, so it was unlikely she would have heard the conversation.

Mr Deasy said he thought Sgt McCabe was “someone who was an honest actor and was just trying to do his job”. He said he later told the then taoiseach Enda Kenny that Sgt McCabe was being treated badly and would be vindicated.

Mr Deasy said his own grandfather was a garda and that it was very derogatory to say a serving officer should not be believed or trusted.

The tribunal has heard previously that the Director of Public Prosecutions directed no prosecution after an historic allegation was made against Sgt McCabe in 2007, saying that the Garda investigation had found no evidence that a crime had been committed.

Micheál P O’Higgins, counsel for Mr Callinan, put it to Mr Deasy that his client had spoken to him about inaccuracies highlighted in a report into Sgt McCabe’s complaints by Assistant Commissioner John O’Mahoney. Mr Deasy said he did not recall this.

Mr Deasy said he believed senior gardaí had “lost the narrative by the time they came in” to the committee. “It was kind of a last gasp to prevent him from challenging their authority directly,” Mr Deasy said.

Earlier, the tribunal heard that Brian Purcell, the then secretary general of the Department of Justice, sent a text message to Mr Callinan asking him how he had “got on” at the meeting with TD John McGuinness in a Dublin hotel car park.

The meeting took place in the car park of Bewley’s at Newlands Cross, the day after Mr Callinan appeared before the committee, chaired by Mr McGuinness.

The tribunal heard that Mr Purcell’s text to Mr Callinan read: “Martin I know you are en route to Dundalk, can u call me if possible, just wondering how u got on with JMcG. Brian.”

The previous day, Mr Purcell had sent a text to Mr Callinan reading: “Well done, exceptional performance under fire, Brian” after the then commissioner had appeared before the committee.

Mr McGuinness told the tribunal that the former commissioner told him at the meeting not to trust Sgt McCabe, and that the sergeant was being investigated over child sex abuse allegations.

Garda Paul Hynes told the tribunal that Mr Callinan travelled from Dundalk, where he had attended a press conference, to the meeting in the car park and then returned to Dundalk for another event that evening.

Garda Hynes, who was driving Mr Callinan’s vehicle, said the meeting lasted about 20 minutes and the then commissioner did not discuss what had happened afterwards.

“He keeps his thoughts to himself,” Garda Hynes said.

Under cross-examination by Mr O’Higgins, Mr McGuinness said he did not call former garda John Wilson “a f***ing header” in the aftermath of the meeting of the committee. Mr Callinan said this had happened when he asked if Mr Wilson would be called to give evidence to the Oireachtas committee.

Mr O’Higgins said his client was not stationed in Pearse Street Garda station in 1983, and was not aware of an incident that year when Mr Wilson took a horse into Garda custody.

Mr McGuinness replied that he had not said that Mr Callinan was stationed in Pearse Street at the time.

Mr Justice Peter Charleton, the tribunal chairman, asked Mr O’Higgins if his client was seriously suggesting he had never heard about the incident, which was a well-known story of Garda “heroics” from the 1980s and had led to Garda Wilson being given the nickname “Jockey”.

“The only thing that’s missing is the name of the horse,” Mr Justice Charleton said.

The tribunal resumes on Thursday.