Together for Yes campaign says it is on course to raise €500,000

Together for Yes, an umbrella group advocating a Yes vote in the upcoming referendum to repeal the Eighth Amendment, launches its poster campaign in Dublin. 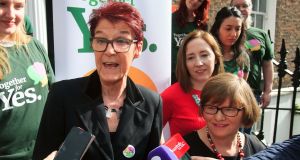 Orla O’Connor, Ailbhe Smyth and Grainne Griffin at the launch of the Together For Yes poster campaign. Photograph: Gareth Chaney Collins

Pro-choice campaign group Together for Yes has said it is on course to raise €500,000 to fund its Eighth Amendment referendum campaign.

The Together for Yes group is a coalition of 70 organisations including the National Women’s Council, the Rape Crisis Network Ireland, Women’s Aid, the Irish Family Planning Association, the Union of Students in Ireland, the Well Woman Centre and One Family.

It is the largest organisation campaigning to repeal Article 40.3.3 from the constitution.

Ailbhe Smyth, the co-director of the organisation, said it has had donations of €170,000 to date which is “in line with and in some respect over our target”.

The campaign launched an online fundraiser on Tuesday morning seeking to raise €50,000 within seven days to fund posters. The €50,000 target was surpassed within two hours and the donations continued to come in throughout the day at a rate of thousands of euro each hour. By 4pm on Tuesday, the campaign page had raised over €168,000 from 4,434 donations and the group extended its target to €250,000.

When asked if she feared that the Yes side in the referendum will be outspent by the No side, she said: “It is not up for us to be adding up what the other side is doing. We are more focused on what we are doing.”

Orla O’Connor, the other co-chair of Together for Yes, said it will be launching its crowd funding campaign next week to get to the €500,000 target. It hopes to put up 5,000 posters around the country.

The first batch of posters will go up in Dublin this week. The slogan the campaign has chosen is “sometimes a private matter needs public support”.

Ms O’Connor said the poster was intended to convey that the issue of an abortion was a “personal and private decision and one that should be between a woman and her doctor”.

Thousands of posters by have already been put up in Dublin by anti-abortion groups.

When asked if she felt that the pro-choice side was late in getting its own posters up ahead of the May 25th vote, Ms O’Connor said: “There are six weeks to go. People are only now starting to engage in the discussion on the referendum.

“I think it will be close. From what we are hearing from all around the country is that people are compassionate and they do care about women.

“They know the constitution is not the place for these very private and personal decisions between a woman and her doctor.

“What is important in this campaign is that the facts get out there so that we hear from women who have had to travel and women who have taken abortion pills.”

Ms Smyth said the posters were intended to convey the “logic and reasonableness” of the Yes campaign.

“This is private and personal. This is not about sloganeering. This is about expressing that sense of what is required here,” she said.

The referendum takes place on May 25th.