Prof Eamon McGuinness, former chairman of the Institute of Obstetricians and Gynaecologists, speaking at a Save the Eighth press conference in Dublin 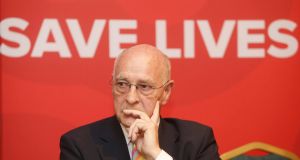 Prof Eamon McGuinness, former chairman of the Institute of Obstetricians and Gynaecologists, at a Save the Eighth press conference in Dublin. Photograph: Leah Farrell/RollingNews.ie

A former chairman of the Institute of Obstetricians and Gynaecologists has said nothing in the law had prevented him from carrying out an abortion where necessary to save the life of a pregnant woman.

Dr Eamon McGuinness said a doctor’s primary duty lies in saving the mother and “giving her all the help she needs, even if that means that the life of the baby is at risk.

“I have had to do that myself, working under the auspices of the Eighth Amendment. Where a woman has developed a uterine cancer for example, it has meant that I have had to advise and carry out an early termination of pregnancy. Nothing in the law prevented me from doing so.”

Dr McGuinness was speaking at a Save the Eighth press conference in Dublin on the Eighth Amendment to the Constitution which guarantees the equal right to life of the mother and the unborn.

A retired obstetrician, he was chairman of the Institute of Obstetricians and Gynaecologists from 1993 to 1996. The current executive of the institute has stated it is in favour of repealing the Eighth Amendment in the referendum on May 25th.

Dr McGuinness said the “Eighth Amendment has never impacted my ability to provide the best healthcare that women and their babies expect and deserve”.

He also said “there is perhaps a misconception that under current law a woman has to be actually dying before we can intervene to end a pregnancy. Again this is untrue.”

The Medical Council guidelines which all doctors had to adhere to were very clear, he said. “Section 48 stipulates that even if a threat to the mother’s life is not immediate or inevitable it can be acted upon.”

It was put to him that the Ms P case went to the High Court to be resolved where the HSE kept a woman who was clinically brain dead on life support because she was 15 weeks pregnant.

Dr McGuinness said he did not know the case and could not comment. Campaign spokesman John McGuirk said the Ms P case “did not involve a threat to the life of the mother. The mother had sadly passed away and the issue was whether they could keep her on life support so that the child could be born”.

Asked about the divergence of view when masters of maternity hospitals and other medical practitioners said the Eighth Amendment was tying their hands, Dr McGuinness said: “I just want to know where it’s tying hands. It didn’t tie my hands”.

Audrey McElligott, who also spoke at the press conference, said she was diagnosed with stage four Hodgkins Lymphoma while pregnant and went through three cycles of chemotherapy at Our Lady of Lourdes Hospital in Drogheda.

Her child was born healthy and she was “so happy no one ever mentioned the word abortion to me”. She said she was “living proof” that the Eighth Amendment “doesn’t prohibit pregnant women from receiving the life-saving medical care that they need”.

Louise Dunleavy, a mother of six, said she developed life-threatening septicaemia during her sixth pregnancy but said her pregnancy did not impact on the treatment she received. “Doctors were not constrained by the Eighth Amendment from acting to save my life.”