Government settles on Covid strategy after 'Battle of the Spreadsheets' 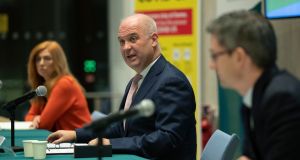 Dr Tony Holohan flanked by members of the National Public Health Emergency Team which outlined the rationale for recommendations made to Government. File photograph: Collins

Perhaps unavoidably, much of the Government’s crunch Covid-19 summit on Thursday was conducted over Zoom.

“It was all very Star Wars,” recalls a source in the room.

Coming from the Health Service Executive’s headquarters at Dr Steevens’ Hospital was its chief executive Paul Reid, while the team in Government buildings was so large it was split between two rooms.

In one were the Taoiseach, Tánaiste, Eamon Ryan, Stephen Donnelly, Paschal Donohoe and Michael McGrath – standing members of the Cabinet Covid subcommittee. They were joined by Simon Coveney and Helen McEntee, and each party leader’s chief of staff. Upstairs, in room 301 of Government Buildings, a large team of key advisers and civil servants dialled in.

Broadly, the meeting was split in two parts – the first, the much-vaunted “Battle of the Spreadsheets”, which marked the National Public Health Emergency Team’s (Nphet) arguments for a tighter period of restrictions pitched against Government-commissioned data. This was drawn up “to make sure Nphet was not the only voice in the room”, said one source.

This was followed by a purely political meeting, which shaped the memorandum that went to Cabinet yesterday.

First, Minister for Finance Paschal Donohoe presented on the cost of pandemic interventions, estimated at more than €1 billion in the last five weeks.

Nphet members followed, outlining the rationale for recommendations made to Government earlier that day. This said that hospitality should remain effectively closed; or if opened, household visits should be curtailed.

An extensive question and answer session followed and one source described it as “fair and honest”. The Nphet members were pressed on the impact of measures they had recommended and how they could be sure six weeks at Level 5 had been worth it. They were also asked how Ireland compared with other European countries in terms of restrictions, and why hospitalisation and mortality figures differed from the first wave.

The argument from the public health officials boiled down to the need to create a “cushion” in advance of “natural socialisation” around the Christmas period.

They argued that the all important R number had to be kept close to 1 “on the way in and way out” of Christmas. Opening restaurants for the first three weeks of December could create a baseline that could then push case numbers over the edge when households are allowed to mix, they warned.

Politicians also asked what should be done if case numbers began to spiral out of control during December. The Nphet officials said that if exponential growth occurred, the most important thing would be to act quickly and decisively – not necessarily that any particular set of measures should be implemented, but that a solution be identified and acted upon.

A key milestone mentioned was if there were 400 cases per day and the figure was rising quickly, sources said.

Pádraig Dalton, head of the Central Statistics Office, made a presentation outlining the serious mental health and wellness impact of the pandemic, while Liz Canavan, a senior Department of the Taoiseach official, presented data compiled by consultancy firm EY. This focused on what seemed to have driven outbreaks, including the finding that townlands which had success in county GAA championships tended to have higher levels of disease, as well as the impact of wet pubs opening outside of Dublin, and examining whether growth in the disease was driven by restaurants or pubs.

It is understood that the possibility of opening wet pubs and resuming team sports for children was discussed during both parts of the meeting, with politicians told that opening pubs in particular could be expected to add 0.3 to the R number, accelerating dramatically the spread of coronavirus.

A key consideration during the political meeting, said sources present, was figuring out how to balance the twin objectives of opening hospitality and allowing households to mix.

The Nphet advice was clear: one could happen, but not the other. Given such a binary choice, the Government was faced with trying to please two masters – keeping with the heavily trailed political promise to reopen the economy, while facilitating the longed-for mixing of families over the festive period.

It decided to keep household restrictions in place until December 18th – a harsher measure than Nphet had recommended – but then to allow both hospitality and household visits for two weeks. The importance of December for the hospitality trade, which can do up to 30 per cent of its annual revenue, was a key factor in this decision.

The discussion also focused on the experience of “holiday” counties during the summer, such as Galway, Mayo and Kerry, which experienced considerable socialisation and eating out but did not record meaningful spikes in infection.

The politicians also discussed antigen testing and the need to improve testing and tracing capacity. They also looked forward to the new year, discussing the possibility of a rise in liquidations and redundancies as hard-pressed companies folded.

The politicians also discussed travel and the Border, with Minister for Health Stephen Donnelly expressing concerns about travel-related cases and how he believed the system for preventing cases being seeded from international travel was not robust enough.

Tánaiste Leo Varadkar raised the issue of cases stemming from cross-Border travel, arguing there is insufficient data on this. He is understood to have written to a HSE body seeking more information.

The Government has now played its hand and the State is about to enter into perhaps the most precarious phase of its struggle with Covid-19: attempting to balance public health, wellbeing and economic concerns, while also keeping a battle-weary public onside.

Facing such a complex set of problems, the risk of a misstep is considerable and the penalties for failure when the stakes are so high will be severe.